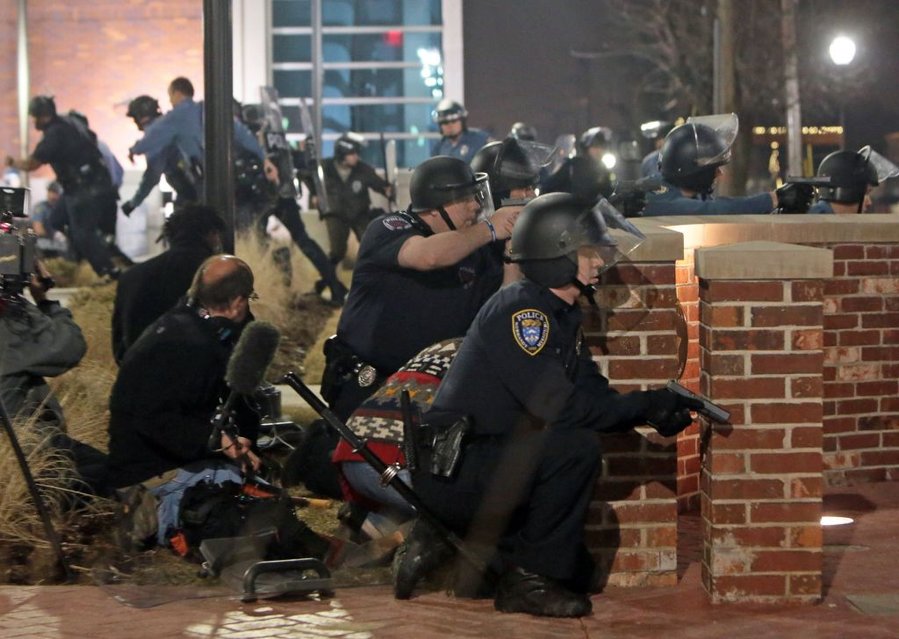 St. Louis County Police Chief Jon Belmar held a press conference late into the night saying that a 32-year old officer from Webster Groves was shot in the face, and was taken to a local hospital. There was also a 41-year-old officer from the St. Louis County Police Department that was taken to a local hospital with a gunshot to the shoulder. Belmar did not describe the specifics of the injuries, but he did say that both officers are considered to have pretty significant injuries, although it’s not known if they are life-threatening injuries.

Since the Justice Department released the scathing report on the Ferguson Police Department there have been 6 people who have been fired or resigned as a result of the racism and unconstitutional behavior of the cops on the force. Protestors were angry that Jackson resigned his position and was not fired nor charged with any crimes. The resignation also means Jackson will be paid for a year, which is about $96,000 and will get benefits, which does not sit well with residents who see him as a criminal. All of this information about the report and the chief still being paid that amount of money just brings back all of the anger about Darren Wilson shooting Mike Brown. Wilson was recently cleared of any wrongdoing by the Justice Department, but the report did talk about the underlying racial bias seen within the community, so this community is just feeling so many emotions at this point.

As the police officers remain in the hospital, there is no known suspects in the shooting case, and it’s not known who or why those cops were shot. Within the past week 2 police officers have resigned, the city manager and city council agreed to part ways, the judge who oversaw the court system also resigned, and a court clerk in Ferguson was fired. It appears right now, the police are again armed with riot gear and flexing their military muscle, which is obviously only going to make the situation worse, as most of the people protesting right now have been peaceful. Whether the protesting continues into the week and weekend it’s not really clear at this point, although the shooting of these two officers will surely have all other cops on guard during this difficult time for Ferguson.