The developers behind the beautiful village for the 2016 Rio de Janeiro Olympics say it will be just as good as a five-star resort.

The athletes village will be transformed into a private condominium complex when the event is over. The 3,600 luxury apartments will sell for around 2.3 million Brazilian reals ($700,000).

The costly place, called ”Ilha Pura” or Pure Island, will be a place to stay for athletes when the event gets started. It is located in Barra da Tijuca, the western Rio suburb that’s the focus of attention of the highly anticipated games. 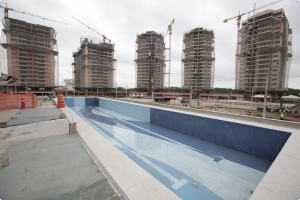 construction and real estate interests. Much different from what we see on the other side of the city, with slums and favelas.

The village is humongous: It has 31 17-floor towers with over 10,000 bedrooms which will be the place to stay for 18,000 athletes and staff for the Olympics.

“All of the visitors here, the ex-athletes and athletes who know many villages, say this village is amazing,” said Mauricio Cruz Lopes, the chief executive officer of Ilha Pura, in an interview with The Associated Press. “We are doing our best to convince all the 10,000 athletes to stay in this village and avoid staying in hotels.”

Mauricio Cruz calls this the largest development in the nation, and said the construction cost was 2.3 billion reals ($700 million), which is only 50 percent of the total. The other 50 percent includes land acquisition, marketing and other expenses.

The luxurious village is way different from what the people used to live just a few minutes from there. A favela nearby was mostly demolished to make way for the Olympic Park. Ten percent of the favela still remains and families that live in there refuse to leave the area because they have nowhere to go. We saw this during the World Cup too, with thousands of families being displaced for the event.

The Olympic village is being done by a consortium of Odebrecht and Carvalho Hosken. Odebrecht was also part of the World Cup projects and is one of the biggest contractors in the nation.

“It’s not just with the athletes’ village, but everything that is being built in Rio is being used as an excuse for real estate development,” said Alberto Murray, a Sao Paulo lawyer and former member of the Brazilian Olympic Committee.

Alberto Murray also talked about the controversial Olympic golf course, which has been under fire by environmentalists and faced many lawsuits since the event was given to Brazil.

Pasquale Mauro, a known developer in Brazil, is planning to build 140 apartments around the golf course to sell them after the event. The places will cost around $2 million each.

The Mayor of Rio, Eduardo Paes, is under criticism for giving concessions to Mauro, who received permission from the city to make a golf course out of a nature reserve.

The controversial projects should be completed next year, right before the games start. The first buyers will move in six months after the event ends.