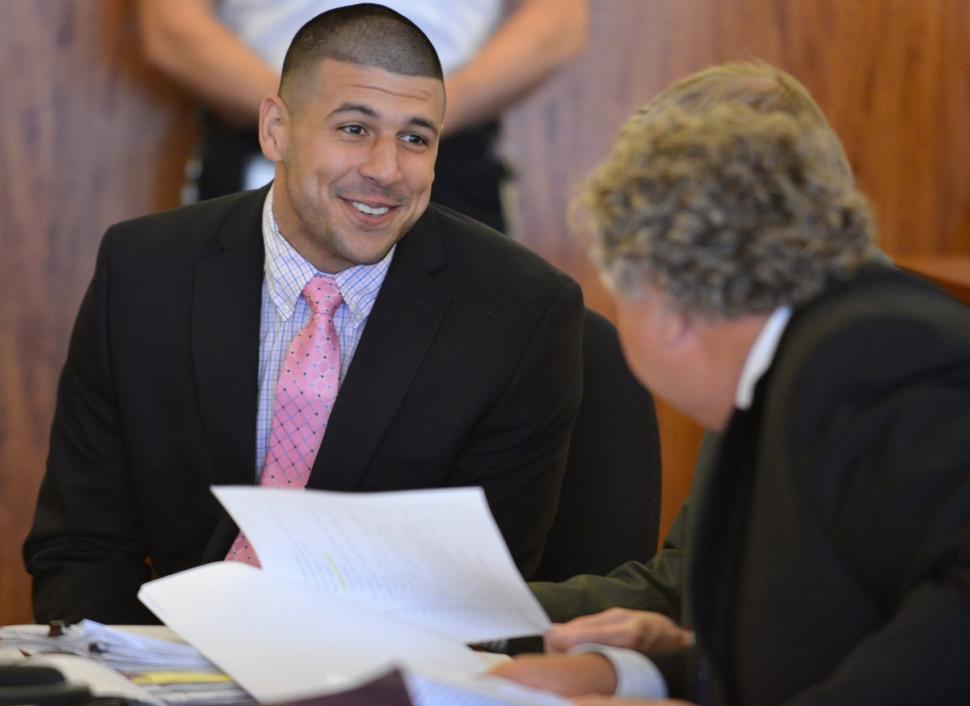 Former New England Patriots tight end looks like he doesn’t care about his murder trial at times. After watching photographs of him and his fiancee, videos of him dancing at a gas station, and evidence of his case. The former professional football player takes time to banter with his attorney or make eyes at his high school sweetheart. The same sweetheart who could be called to testify against him.

Hernandez is accused of shooting and killing Lloyd, who was dating the sister of Hernandez’s fiancee at the time. Lloyd’s body was found in an industrial park just blocks away from Hernandez’s home. Around the same time, Hernandez had signed a lucrative $40 million contract with the New England Patriots. The year before the murder, he played in the Super Bowl and caught a touchdown pass from Tom Brady, who lost a close one to the Giants.

The trial began January, and now Hernandez spends around 8 hours from 9 am to 4 pm in a courtroom watching evidence and discussing the case.

Hernandez has lost some weight since the arrest but there are still flashes of his old self when he enters the courtroom. He steps in with swagger, hugs his lawyer, and is often heard talking sports with the court officer or whoever is near him.

One of his lawyers was asked about the former tight end but did not want to comment on how he is doing. The judge has told all people involved in the case not to speak to reporters about it.

For the most part, Hernandez appears to pay close attention to what is being said or happening in the courtroom. He stands respectfully for the 16 jurors when they enter and leave the room. Hernandez is another person when the jury is not there. One day Robert Paradis, an old high school teammate who was called in to be questioned, told investigators that Hernandez owned a .45 caliber gun. He also said he opened a drawer in Hernandez’s home and found what he believed was some kind of gun wrapped in a shirt. He did not unwrap to confirm if there was a gun but did pick it up. Hernandez gave his high school teammate a bad look as he walked past, stared him down but didn’t get a look back from Paradis.

On days when Hernandez’s family attends the trials, he turns on the charm. He shows a dimpled smile to the front row and sometimes whispers jokes. When his fiancee comes, the two flirt together. Hernandez gives her all kinds of compliments, mostly about her hair. He also winks at her from time to time.

Will he wink and smile when the judge reads his sentence?