The gorgeous and voluptuous 31-year old model and former stripper, cleared the air about her known feud with the Kardashian family, and tried to explain clearly and in her own way her side of the story. This argument began back in February when Rose publicly criticized and gave her input on the relationship between Khloe´s  17 year old sister Kylie Jenner and the rapper Tyga, who is 8 years older than her.

During an interview on 105.1´s The Breakfast Club, Rose said in her words and her own opinion that the rapper is ridiculous and should be ashamed and embarrassed for leaving a beautiful family including a baby, for a 16-year old that just turned 17. After this strong comment made by the model, Kylie’s older sister Khloe took matters into her own hands by going on a Twitter rant against the model, saying that she was a stripper at age 15, and not to worry about her sister’s life because at age 17, the teenager has her life together and already has a successful career. Khloe, who is 30 years old, also added this comment.. 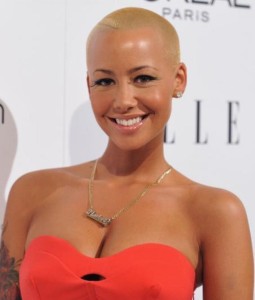 Amber also gave her input about another Kardashian sister, which turns out to be the famous model and reality star Kim Kardashian. Amber Rose stated she could have definitely kept quiet and never expressed her feelings about the situation, but since she was a young dancer and dealt with older men at a young age, that gave her the reason and knowledge to talk openly about the topic. Amber said she understood why Kim took it the wrong way, but she says she could have made a phone call to clear up the situation.

Later on, the rapper Kanye West, Kim’s husband, also Amber´s ex boyfriend, commented about the feud, telling Power 105.1 that it was very hard to be with someone like Amber Rose, and that he had to take 30 showers before he got with Kim Kardashian. Rose replied by saying that they were a very happy couple when they were together and now because they’re separated and no longer anything, she’s considered a slut and it’s not fair. Because of all this drama, Amber says she constantly gets dirty comments and messages via social media. The model is upset by the hurtful comments and states that this not only disrespects her, but other women as well.

Despite all the drama that had a lot of famous people involved, the model Amber Rose said she would absolutely love to have a conversation with Khloe Kardashian, to work things out on what was said about the younger sister. But not all was roses and butterflies as Rose took the opportunity to take one last shot at the Kardashian sister, by saying that Khloe didn’t have to take it this far on Twitter, because the family is only famous for one thing, Kim’s sex tape.