In 2014, the number of adults that are considered obese rose to 27.7%, which is over 2 percentage points more than what it was in 2008. In 2013, the obesity rate was at 27.1% and in 2008 it was 25.5%, so there is a steady increase in the obesity rates, and this is not a good thing for society as a whole. Healthways and Gallup have been conducting these polls since 2008, so this is the highest obesity rates have been under the tracking system. What is even more concerning is that the obesity rates have increased the most since 2008 in the group of people who are age 65 and older. 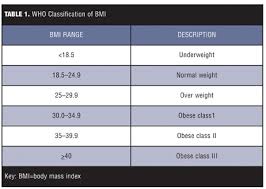 There have been a lot of Americans who were in the overweight category, but now a lot of these same people are classified as obese. In the poll, the percentage of Americans that are considered underweight has remained constant at 2%, which is actually a fairly low number considering how many people have been tracked. The survey was done between January and December 2014, with over 167,000 American adults taking part in the survey, all of which were over the age of 18. The researchers conducted surveys at random using both cell phone and land lines, and made sure that residents from all 50 states were represented in the polls. The sampling error was only plus or minus 1%, with a 95% confidence level, so these results are fairly spot-on.

If you look at what is considered obese, a body mass index (BMI) of 25 to 29.9 is considered overweight. Anyone between 18.5 and 24.9 on the BMI scale is considered to have a normal weight, while people who have a BMI of 18.4 or less are considered underweight. From 2008 until 2014, 35% of Americans have been considered to be a normal weight, although the obesity rate has gone up each of those years, except for 2011. There is also a steady rise in the number of American adults who are considered to be morbidly obese, but obesity is separated into three different categories on the BMI scale. There is obese class 1 which means your BMI is 30 to 34.99, class 2 is 35 to 39.99, and class 3 obese is when your BMI is at 40 or higher. The people in the class 3 category are considered morbidly obese, and in 2014 4% of Americans classified themselves in this category, which is the highest since the tracking began in 2008.

What Groups are at Highest Risk

In terms of which groups have had the highest obesity rates, the rates have increased steadily for every group, however people over age 65 have seen the biggest climb in obesity rates. People over age 65 have had a 4 percentage point increase since 2008, then the 45 to 64-year-old group with a 3.5 percentage point increase, and Americans in the Midwest have increased 2.9 percentage points. Women have also been rising in the obesity category since 2008, with a rise of 2.8 percentage points. Young adults age 18 to 29 have basically stayed the same across the board. The blacks have the highest obesity rate out of all the demographics in America, although this group has basically stayed the same as far as obesity rate since 2008. Blacks are at a 35.5% obesity rate overall, while Americans that are 45 to 64 are at about 30%. The study has also found that people earning more than $90,000 a year are less likely to be obese than people who earn less than $36,000 a year, which does support theories of healthier food being too expensive for the lower-income Americans.

What This Means For Americans and Health

When it comes to overall health, morbid obese people have the lowest well-being at 64.5%, overweight people come in at 63% in overall health, while the underweight Americans are also in this group with a well-being at only 62.2%. When you look at the class 3 group, they only had a 50.9% well-being index, which is the lowest out of all of the groups and demographics tracked in the survey. Well-being impacts a number of things including jobs, social status, mental health, and overall quality of life. Obviously the more obese you are, the more depressed and isolated you feel, which then leads to anxiety and depression. Anyone in the obese category is going to have worse health than those in the normal category, but the same can be said for the underweight group as well.

There are numerous health problems that can occur as a result of being overweight, with high blood pressure and diabetes being the most common. These two medical conditions alone can lead to amputations, strokes, heart attacks, coma, and even death. Not to mention, infections and emergency surgeries are more common in the obese and morbidly obese demographic, which then puts a strain on the healthcare system. The people in this group are also more likely to be at poverty level, which means they often cannot pay for their medications or medical procedures, which gets passed onto taxpayers, and then everyone sees higher bills in the medical system.

The best thing people can do is to start exercising and eating better, because with the rates climbing each year, the outlook for Americans does not look good. The trend often goes from being overweight to obese, and then winding up in the morbidly obese category within 10 years. Looking at that data it is easy to conclude that people are not taking their health seriously, and are not exercising or doing what needs to be done to get back to a healthy weight and BMI. The more Americans that slide into a little overweight to morbidly obese, the more strain financially and medically this puts on everyone. This also increases the number of Americans with diabetes and high blood pressure, and once you go down that path it’s even harder to get yourself out of the overweight category. It’s never too late to start exercising and eating right, and if you don’t take your BMI or weight seriously, you will find yourself dealing with multiple medical issues down the road.