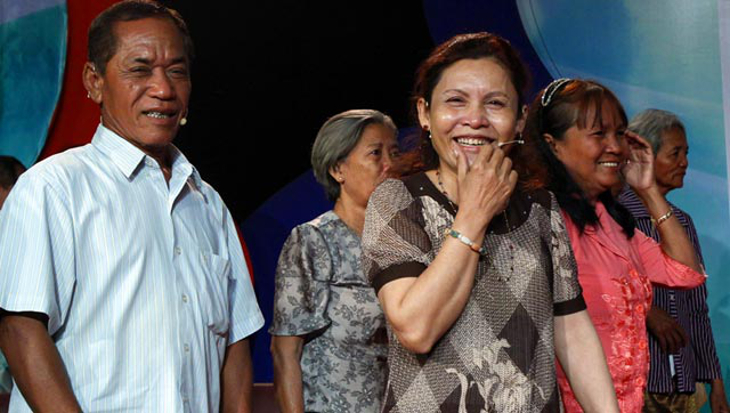 Holding hands together, tears running down her eyes, Sam Somaly looked into the cameras and made an emotional request to three siblings who have not seen her for almost 40 years. The family was separated by a brutal regime that’s still around today.

When the Khmer Rouge regime took control of Cambodia back in 1975, they literally split families apart as their intentions were to empty cities and force the population to work countryside cultivating lands and doing all kinds of agricultural work.

Sam Somaly and her family were part of these groups of people split in a bizarre attempt to create an ultra-communist agrarian society. Her parents and one brother were part of an estimated 2 million residents that didn’t resist starvation, executions and excessive work. But she never lost hope in finding her remaining family members, two brothers and a sister. She compared the search to “finding a needle at the bottom of the sea.”

Sam had no photos, no documents or birth certificates that could contribute to the search. Two of her siblings were so young at the time of the regime’s arrival, that she thought they forgot her name. Even Somaly, would have a hard time recognizing them if they passed her on the street. But she never lost hope, and one day a reality show came to the rescue.

It’s Not a Dream

A show called “It’s Not a Dream” is in charge of transforming the bad days of Cambodia into one of the most emotional forms of entertainment. The show has already reunited lots of families separated by the genocidal regime. Somaly watched the show and saw the chance, she called the station for help. They heard her story and the crew came to film it.

“I feel like I’m living alone, in the middle of the ocean,” she said in a six minute video recorded by the station back in March of 2014. Her video ended with an announcement urging anyone who might know Somaly’s lost family members to call the station’s number. Nothing came up for months.

Four months after Somaly’s video aired, a retired policeman stumbled across a morning repeat of Somaly’s plea. He didn’t recognize her or her name, but did recognize the name of his father, Sam Seng.

The policeman who’s name is Vantha, called Bayon TV, and told the station what he knew and asked expectantly: “When can I see her?” The station told him to be patient because the reunion had to take place on live television. The show went through a process of confirming the information and finding her other siblings.

The day had finally come. Somaly thought she was just coming to the studio to tell her story once again, but she was about to be surprised.

At the show, the original video that Somaly had recorded nine months earlier was repeated, and then came a new one featuring her lost cousins.

The host brought them out and tears were shed. She got to meet a lot of her family members that day, but she had one final request.

[quote_center]”Please find the rest of my family,” she said. “Please don’t give up.”[/quote_center]