Not only did the Cleveland Cavaliers avoid a huge upset in their 87-86 win over the tanking Philadelphia 76ers on Sunday, they also appear to have dodged major injuries to two of their players.

Both Kevin Love and recently acquired Iman Shumpert were forced to exit the game early without returning to action. However, Cavs coach David Blatt has hinted that both players are fine and that they will be back soon.

Shumpert, who finished the game with nine points and three steals in just 11 minutes, missed an open dunk late in the second quarter after his leg appeared to buckle as he tried to jump. The former Knicks player asked to be substituted out of the game after he was looked at by Cavs trainer Stephen Spiro. He then walked under his own power to the locker room to find out the severity of the injury.

Love, who got injured late in the game, finished with 10 points and 10 rebounds in 31 minutes of action. He missed a layup with 7:16 remaining in the fourth quarter when the contact to his back occurred. The team called timeout shortly after, and he went straight to the locker room for treatment.

The Cavs have a few days to rest and play again on Thursday, when they play at home against the surging Miami Heat.

“I just have to take these next couple days,” Love said. “It’s kind of fortunate with Shump and myself that we have these couple days.”

Love confirmed that his back felt good and that he probably won’t miss any games from this. Not a lot is known about Shumpert’s status since he did not speak to reporters.

The game was really bad for both teams. The Cavs shot 38.8 percent and committed 17 turnovers. The Sixers actually shot a little better with 40.5 percent and committed four turnovers less, but still took the L. They were so bad that the teams didn’t score for the last 4 minutes of the game. Kyrie Irving said he was just hoping for the team to hang on for the W.

LeBron James had a decent game with 20 points, 11 rebounds and six assists, but had 5 turnovers and shot 8 for 24. He denied talks that the team is tired. 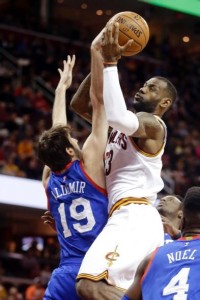 James was also asked by the media if the team was on a “minor funk” after the Nets loss and now this one point win against the Sixers, who are just waiting for the season to end.

Sumpert’s loss would leave a huge hole for the Cavs to fill. He provides good defense to the team and there’s no one like him on the roster. Cavs hope it’s nothing serious.

The Cavs play at Quicken Loans Arena against the Miami Heat, who are looking to seal a playoff spot.

The Philadelphia 76ers play at home against the Los Angeles Lakers.