China says its military spending will increase over 10% this year. This is one of the latest in a series of increases that is aimed to narrow the gap between the United States, mainly on military defense.

According to a report aired out at the start of China’s National People’s Congress (the annual meeting of the country’s parliament) it estimates the military defense spending will be about 887 billion yuan which equals to $144.2 billion.

“Building a solid national defense and strong armed forces is fundamental to safeguarding China’s sovereignty,” Li Keqiang told thousands of delegates that attended the Great Hall for the congress meeting.

The increase has left many shocked because China suffers from other economic problems that are not being taken care of. Instead, they’ve prioritized military and left everything else as second.

It has also created tension between countries near China because some believe this will speed up the pursuit of its territorial claims in the South China and East China Sea.

Some analysts in China say the spending on military defense is very suspicious. They believe some of this budget is actually being used to fund paramilitary forces such as the People’s Armed Police as well as the People’s Liberation Army.

Asia Pacific Director at IHS Aerospace Paul Burton estimates that the increase is not just 10%. He says it’s over 35% higher than what was announced at the meeting.

“China’s expanding strategic reach and extensive modernization requirements will continue to require significant investment over the next decade,” Burton declared. How much is China willing to sacrifice to increase its military spending? Right now it doesn’t sound like much but in a few years it will severely hurt the economy which is already unstable.

Even though China’s increase is big, it still doesn’t compare to the United States military expense which was $598 billion last year. The expense for the U.S has declined the last few years so Chinese officials hope they can catch up sometime soon.

The budget has seen a massive increase since 2011. Here are the numbers provided by China’s state news agency Xinhua:

The navy will also see a huge spending because China has focused on winning land battles in the past and not naval power. They will now get a boost in its submarine force and its seaborne nuclear deterrent. Just two years ago, China’s first aircraft carrier went into service and a second one is currently under construction. 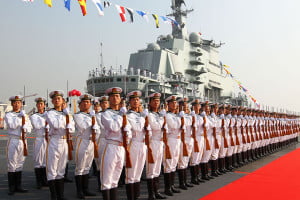 That’s not all, the People’s Liberation Army plans to increase its pay and hope it can attract better recruits, like college graduates. Will this make China a military powerhouse in the future?

May 20, 2022
Monkeypox is a rare viral infection that’s transmitted to humans from animals. While it’s common in Central and West Africa, it’s rarely found in...