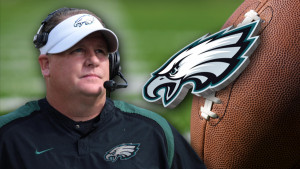 Once Chip sat down in the conference room in front of all the media, he knew it was time to clear the air.

The Philadelphia Eagles head coach ended months of speculation about the team trading up to get the former Oregon QB and Heisman Trophy Winner, Marcus Mariota. The coach went as far as to name the recently acquired Sam Bradford as his new starting quarterback. He also denied a power struggle between him and former general manager Howie Roseman, that ended with Chip taking control of personnel decisions.

Chip had some nice things to say about Marcus. ‘’I think Marcus is the best quarterback in the draft,’’.  But… ‘’We will never mortgage our future to go all the way up to get somebody like that because we have too many other holes that we’re going to take care of.’’ Especially after letting Jeremy Maclin leave and the whole Frank Gore thing.

Of course, Kelly could be trying to throw other teams off. NFL coaches don’t reveal draft strategy. Former Eagles coach Buddy Ryan famously called Keith Byars ‘’a medical reject’’ before picking him in the first round of the 1986 NFL Draft. So don’t be surprised if they do trade up.

The addition of Bradford and the new deal for Mark Sanchez has Eagles fans scratching their heads. The team has invested around $17 million in just two quarterbacks for the upcoming season. Sam Bradford was acquired from the St. Louis Rams on Tuesday in a QB swap for Nick Foles and two late draft picks. Many fans thought this was the beginning of the move up for Marcus Mariota movement.  Kelly has denied all of this and said Bradford isn’t trade bait and that he already has turned down a first round pick offer for the former Oklahoma QB.

‘’We didn’t bring Sam here to be a trade chip’’ Kelly said. He even joked about this and said, ‘’I’m the only Chip here.’’

Kelly had been quiet for a while, since the end of the regular season to be exact. For the Philadelphia Eagles head coach, the offseason has been crazy.

First, Chip assumed control of all team moves and Howie Roseman was elevated to executive vice president of football operations. The rumor was, this move happened after a rift between the two. This was just the beginning of the front office shakeup as Tom Gamble was dismissed. Kelly came out today and squashed all the rumors of a supposed beef between the two and said team owner Jeffrey Lurie was the one that made the decision.

Last week, Kelly started bulldozing the team and made one of the most surprising trades in recent years, sending LeSean McCoy to the Bills for Kiko Alonso. Then, Trent Cole and Todd Herremans were released and Maclin left through free agency. It wasn’t all bad, as they improved their defense by signing Byron Maxwell and brought back Brandon Graham. Today, it was another big day for the Birds as they signed the former Chargers running back Ryan Mathews to a three year deal.