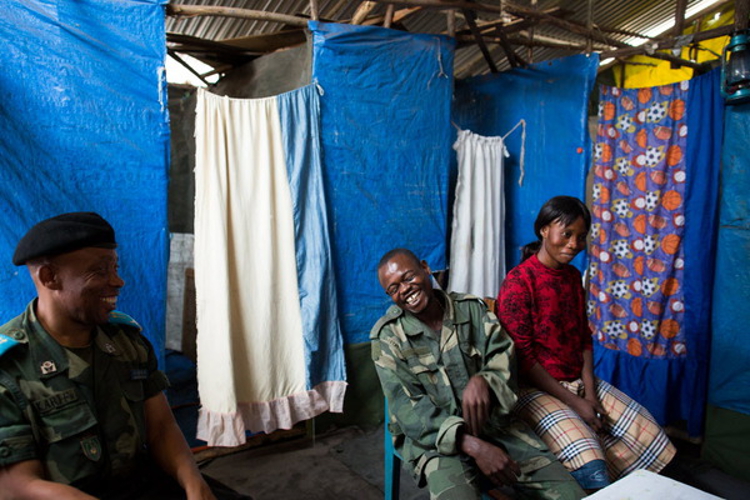 From bad conditions in the barracks to the conflict zones, Congolese army wives are rarely talked of and in a position where they receive no help or support from the government. They get by day by day without knowing if they’ll ever see their husbands again. Here’s the dramatic story of one of the many wives going through this situation in Congo.

Alphonsine Bipendo is her name. She always knew she would live a tough life but not like this. She married a Congolese soldier at 16. She never expected to fight alongside him in trenches, were the wrong move gets you killed.

“When it happens, you don’t think about anything else, even your kids,” she says of her occasional brushes with rebel fighters.

She frequently visits her husband where he’s stationed. This is the place where his unit forces deploy to bring the others food and most importantly, their pay. When gunfights unfold, she takes cover behind her husband, who shoots until his bullets run out. She’s been in this situation so many times, she knows the weapons he uses and how they work by heart.

Ms. Bipendo who is now 24 and has been married for 8 years, spends her days in a camp called Katindo, which is located on the eastern side of Congo. This is the only barracks available for the soldiers on that side of the country. The people living there say it’s more of a displaced persons camp than a site for soldiers. Most of these people live under structures made out of tarpaulin (tarp) or rusty metal.

Madracule Mandale and Ms. Bipendo, have been living in this camp for five of their eight years of marriage. The two spend hours together watching their kids play around the area. Bipendo is currently on a break from working at camp Katindo’s market, where she earns around $85 per month.

She says the site has some signs of Army life but the place is more of a community with women laughing, kids playing with toys made by them, and girls carrying their siblings.

The war on this side of Congo hasn’t seen much press, according to them. Journalists are not banned from the area but it is illegal to take photos or notes about the place. The soldiers are also not given permission to talk to reporters.

Bipendo and her husband share their small home with two other families. The house is separated by sheets hanging from poles. Living here isn’t free, there’s a fee for building and living in the land.

It’s not an easy life but as we can see, their love outweighs everything else.

“It’s a matter of accepting the consequences of your choices,” Bipendo says. “We do this for love.”