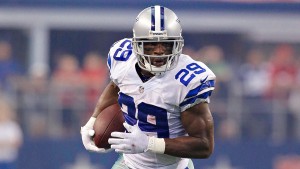 The Dallas Cowboys didn’t change their $5 million per year offer to Murray. What did he do? He took his talents to one of their biggest division rivals. The Cowboys are now without their star runner and fans must be furious right about now.

The Cowboys division rivals, the Philadelphia Eagles, came through with a worthy offer for Murray. This offer is said to be around $8.4 million per season, 3.4 million more than what the ‘Boys were offering. ESPN’s Adam Schefter said the deal guarantees the star runner $21 million out of the $42 million with his new contract. Eagles fans are hoping he doesn’t pull a Frank Gore, but Murray earlier today told ESPN.com’s Todd Archer this:

“It was never about the money.””I could’ve taken that a long time ago. It’s about winning a Super Bowl & being fair.”

The signing is great for the Eagles, who take an important piece of their rival. The Dallas Cowboys are going to have to make serious moves to fill the hole Murray left in that position.

The Cowboys were built around Murray and Bryant. Now that Murray is gone, the wide receiver is going to have to step up even more. Murray isn’t just some decent runningback, he led the league in rushing last season. His QB former, Tony Romo, had less pressure and had a huge season because of that.

What Will the Cowboys Do Now?

Rumors say they might be interested in Adrian Peterson, not that they weren’t interested before, but now it’s a priority. The problem is, the Cowboys have shown they don’t want to overpay a runningback. They would also have to offer the Minnesota Vikings something in return, maybe some draft picks.

The Cowboys still have one of the best offensive lines in football, so they don’t have to go all out on acquiring an elite runner. Maybe the team will use Murray’s backups, Joseph Randle and Lancer Dunbar as a one-two combo. There are still a few interesting options out there, guys like Reggie Bush, C.J. Spiller and Stevan Ridley are now the top free agents left for this position.

If not, the situation is fixable through the draft. Guys like Todd Gurley and Melvin Good might still be available by the time Cowboys select with their 27th 1st round pick overall.

The ‘Boys will sure feel the absence even if they sign or draft one of these guys mentioned above, because what he did last year was just insane. What would be the best move for the Cowboys?