The Egyptian government has announced a big proposal. They plan on building a new capital to the east of the current one.

Minister Mostafa Madbouly said the project would cost around $45 billion (£30 billion) and take five to seven years to complete. He said, the purpose of this new capital is to ease the overpopulation and traffic of their current capital, Cairo.

The plans were announced at an investment conference that looks to revive the struggling Egyptian economy. The conference helped as they’re getting $12 billion in aid and investments from powerful countries like Saudi Arabia, Kuwait and the United Arab Emirates.

The Housing Minister said the population of the capital is around 18 million, which is a little too much. It is estimated that this number will double in less than 40 years.

All the government related structures like the parliament, ministries and departments would be moved to the new capital. Even the foreign embassies would pack their bags and move to the new metropolis.

Experts on the area say the city, which does not have a name yet, will have almost 2,000 schools and colleges and more than 600 health care facilities. This new capital would create more than a million jobs. Impressive!

The city’s population will be around five million and will cover 270 square miles.

Planners say this is the ideal spot for a new capital because the city’s site is located between Cairo and the Red Sea. This would give the proposed capital a good shipping route.

The city is going to be built by Capital City Partners, which is a private real estate investment fund led by the same people who built the world’s tallest building, the Burj Khalifa.

“It is a natural extension for the city of Cairo,” Mr. Alabbar told the BBC, explaining that the new development would be close to the famous capital.

“It is a wonderful opportunity to be able to design something from scratch, and to design it keeping in mind the needs of the Egyptian people and the Egyptian government.”

The proposed capital is already drawing comparisons to Shangri La because of its grand scale.

When it’s finally completed, the new capital will be around the size of Singapore with an airport larger than Heathrow, located in England.

The idea is to bring as much citizens as they can from Cairo to reduce the congestion, pollution and population.

The government says this plan will bring back the Egyptian economy and give them a much needed spark. Some people are still skeptical because other big projects have faded and have not been completed before.

President Abdul Fattah al-Sisi can’t afford this to fail. He says this would destroy all hopes of improving the economy.

This isn’t the first time a capital has planned to move. Countries like Nigeria and Brazil have done it before.

Politicians like the United States Secretary of State, John Kerry, have praised Egyptians for their recent reforms and plans to revive the economy. He urged businesses to invest in Egypt.

Is this the solution to Egypt’s economic problems? What happens to Cairo after this is completed? 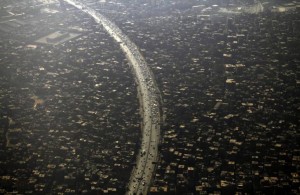