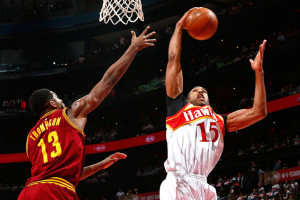 The Cavs appear to be on their way to the playoffs and are currently going through a good stretch of games but tonight the Hawks made a statement. Heading into tonight’s contest against the top seeded Atlanta Hawks, the Cleveland Cavaliers had won 20 of their last 24 games. Impressive right? Not for the red hot Hawks. This was an intense matchup that we will likely see again in the playoffs because it seems like the rest of the Eastern Conference won’t be able to stop them. Many fans thought this would be the Cavs night but then 4th quarter came..

The Hawks were in control most of the way but the Cavs fought back in the third quarter to make things interesting. That changed a few minutes later as the Hawks pulled away and took a commanding 15 point lead with 6 minutes left. The Hawks improved their record to 49-12 while the Cavs dropped to 39-25.

The night was special for the Hawks and fans because Dominique Wilkins got his statue. The players followed up with a convincing performace. Early in the 1st, the Hawks got up to a 36-19 lead and shot for more than 70% from the field. As if that wasn’t enough, seven Hawks scored in double figures. The shooting percentage would eventually drop to 51.2% but the game went their way. The team erased Timofey Mozgov, who only had 6 points and 3 rebounds in 21 minutes. None of the Cavaliers shot 50% or better.

It was not eye catching basketball but the Hawks got it done the same way they’ve been doing in it throughout the season. Atlanta played with consistancy, effort and confidence.

This wasn’t the best night for the Cavs, their 3 point shooting was off. The night ended with a mediocre 13 of 18 from beyond the arc. LeBron, Love and Kyrie did not perform well. The new big 3 finished with a combined 52 points, very low numbers. The Cavs play the Suns, Mavs, Spurs, Magic and Heat in their next five games.

Give The Hawks Some Credit

Yes, we know the Cavs played poorly and the shooting tonight was wayyyy off but give some credit to this Atlanta Hawks team who came out and played like serious contenders. Some NBA fans are still not sold on this team but believe me, they will be by the end of the regular season. With that being said, there’s still plenty of games to go and anything can happen. The Hawks next 5 games: Sixers, Kings, Nuggets, Suns and Lakers. 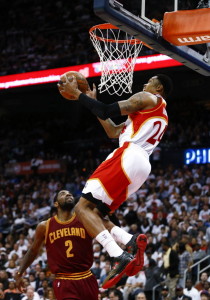