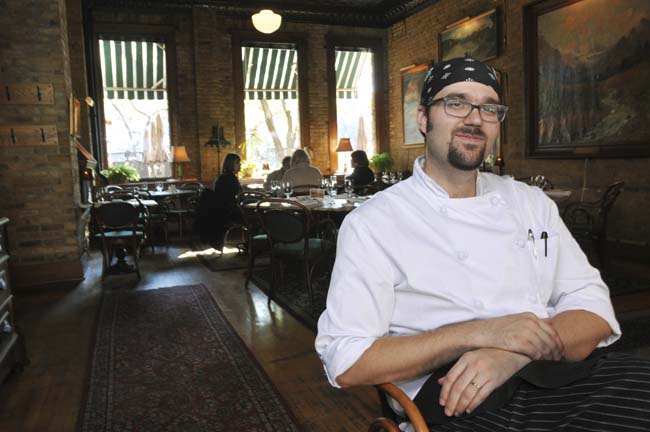 Wyatt Evans, the current chef of W.A. Frost is going to be opening up his own restaurant sometime in early summer in St. Paul, MN. The 11-year W.A. Frost chef is going to open Heirloom on Marshall and Cretin Avenue, and Evans is one among many chefs who have left W.A. Frost to start their own company. In terms of local restaurants, W.A. Frost has been known to hire great chefs and basically give them all the tools they need to one day open their own place, and the hard work of chefs like Evans show that it does happen.

Evans says that his restaurant will server a lot of “modern, farm-house cuisine” with a focus on traditional slow food. The restaurant will be able to seat up to 80 people all together, which is fairly large for the building size. There will be a chef’s table that can seat up to 10 people, as well as a 10-seat counter, and there will be a semi-open kitchen. Evans has already signed a lease for two different buildings which are between the Pin Curl Salon and the Wicker Shop.

Evans is also planning to put a bar into the restaurant, but he will focus on beer and wine since that is all he is licensed for at the moment. The bar at the Heirloom will mostly be focusing on a lot of local beers from the St. Paul, MN, area, as well as half-bottles and glasses of green and bio-dynamic wines. Evans wants to make his bar affordable for everyone, so that is why he is planning on a smaller alcohol menu, making the selections geared toward St. Paul breweries, which can help stimulate the local beer companies.

Evans is a highly-accomplished chef and has worked very hard to get where he is at right now, he is excited to start his business in the St. Paul area, and he hopes that residents from neighboring communities also stop by to get a taste of his traditional cuisine. Not only is Evans grateful and loyal to the St. Paul area, he also is feeling overjoyed because owning his own restaurant has been his lifelong dream, and this means you can expect some fun festivities during the grand opening in the near future. Evans said that more information will be available in the next month or two as far as the opening weekend and he is hoping to have a more firm opening date once everything gets finalized. For now, Evans is just taking it one step at a time, and enjoying this monumental event in his life.