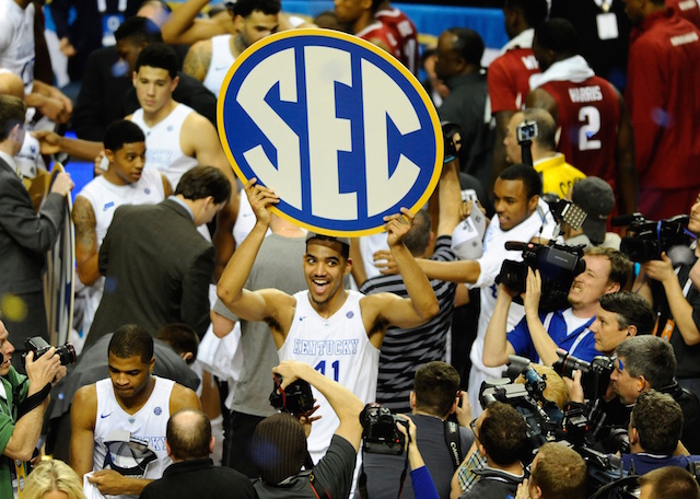 The top ranked Wildcats are now riding on a 34 game winning streak and have another Southeastern Conference Tournament title as they are headed to the NCAA bracket. The players cut down the nets as part of the celebration. ”Those aren’t the nets we’re really looking to cut down,” junior forward Willie Cauley-Stein said. Of course, he’s referring to the nets that are still left to cut down at the NCAA  tournament. The players know it’s just part of a long road ahead.

The team was splendid today. Cauley-Stein scored 15 points and grabbed 10 boards, the team never trailed against the 21st ranked Arkansas Razorbacks. The final score was 78-63 and earned Kentucky their 28th SEC Tournament title.

Kentucky now 34-0 are only the fourth team to go undefeated into the NCAA tournament since Indiana, who finished off the perfect season with a title back in 1976. The last three teams that went into the NCAA tourney with a perfect record, all lost. Including an Indiana State lead by the legendary Larry Bird.

”We’re still only guaranteed one game, so it’s really the slate is clean whether we’re 34-0 or have got five losses,” Cauley-Stein said. ”It’s still from here on out, you’re 0-0.”

Arkansas was trying to win their second tournament title and first since 2000. Bobby Portis added a low 13 points with only two rebounds. Michael Qualls, who came off the bench, was the biggest contributor with 18 points.

It was revenge time for the Wildcats, who were swept by the Razorbacks last season. Kentucky was just too good this game. The defense forced the Razorbacks to make mistakes and it paid off. The team never looked comfortable and they cruised to their 34th victory.

Kentucky rewarded their fans with great offensive play, scoring the first eight points of the game. Arkansas had not trailed this tournament, but in this game, the best they could do was tie them four times. Both teams now look to go far in the biggest tournament, especially Kentucky who’s only way to finish the season is to take the title, anything else would be disappointment.