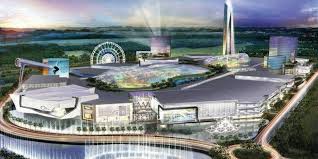 We all know Mall of America is the biggest and best mall in America, but the owners of the Mall of America are thinking of creating an even bigger mall in Miami, Florida.

The Mall of America owners unveiled the new project on March 5, 2015, and currently is dubbing the project as American Dream Miami. This new mall is going to have a seven-acre lake, submarines, ice cream stands, a sea lion show, and an amusement park. Not to mention it will have hundreds of shopping stores and also an indoor ski slope that has a ton of artificial snow covering it.

This new project is coming at the heels of new renovations at the Mall of America, which is going to cost about $1.5 billion and will add over 520 stores. The size of the mall is also nearly going to be doubled, adding even more unique stores and attractions to the already infamous mall. There will also be an office tower, another hotel, and possibly a water park and indoor ice rink in the Mall of America upgrades in the future.

The entire concept of the new Miami mall comes as amusement parks and other like attractions are finding a steady rhythm in pop culture, but going to malls to purchase goods has been on the decline for many years. So the Mall of America owners are looking to bring people into the shops to buy items through the attractions and fun stuff there is to do that doesn’t require shopping.