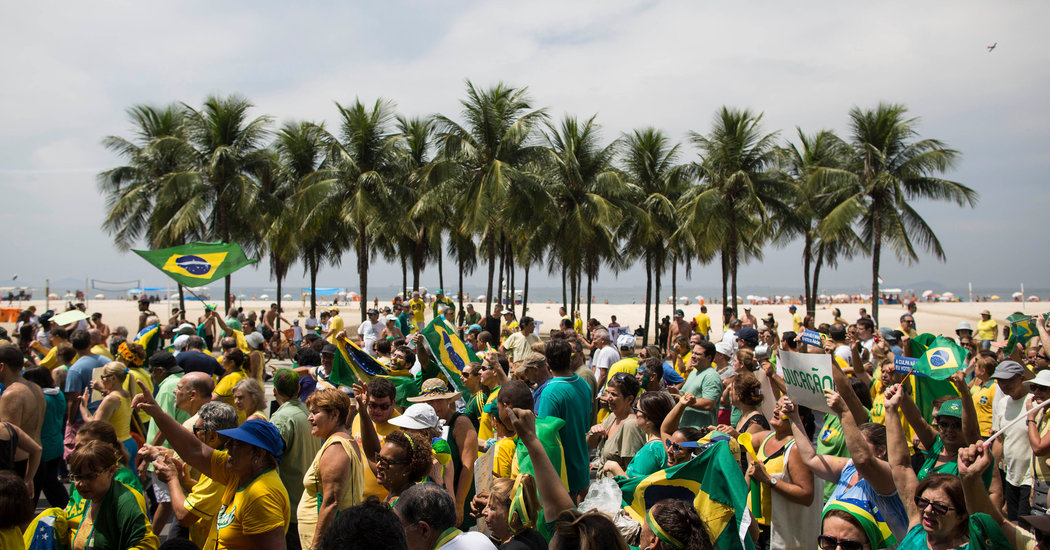 Close to a million protestors took to the streets on Sunday in cities throughout Brazil to protest staggering inflation, a slow economy, and corruption. They also called for the impeachment of left-wing president Dilma Rousseff.

The protests in South America’s largest economy come as Brazil struggles to overcome economic stagnation and political disorder, as well as to pick up the pieces of a once robust growth that halted after Rousseff took office in 2011.

Now early into her second four-year term, it is doubtful that Rousseff will face the impeachment proceedings demanded by her opponents. Five years of economic sluggishness and a multibillion-dollar scandal which involves the state-run energy company Petroleo Brasileiro SA, also known as Petrobras, have ignited the protesters’ anger.

The protests are indicative of a polarized country unhappy with Rousseff’s leadership, despite narrowly winning the elections five months ago. This is especially so given how Brazil’s gains from the recent boom are starting to give in to the current slowdown.

The large demonstrations aim to support opposition parties and restive allies, including heads of both houses of Congress, who are supposedly part of Rousseff’s ruling coalition, but nevertheless are blocking efforts to pass reforms intended to push the economy.

Two members of Rousseff’s cabinet recognized the rights of the protestors during a press conference on Sunday night, but downplayed the importance of the demonstration saying they were merely expressions of discontent by those defeated in the election.

They also discredited the protests as displays of “intolerance” by their opponents and likened their demands to coups efforts.

Aecio Neves, a centrist politician defeated by Rousseff during the October elections, said in an online statement that Brazilians “went to the streets to reunite with their virtues, their values and also with their dreams”.

Sunday’s demonstrations were mostly calm, showing little of the violence seen in the massive protests in 2013 when Brazilians rallied against billions of dollars spent, in spite of the faltering economy, to host the 2014 World Cup. But the scale of the current protest is nevertheless matched to those of two years ago with an estimated one million participants nationwide.

32-year-old advertising worker, Diogo Ortiz, said that the “people feel betrayed” and condemned the Petrobras scandal as “a national and international disgrace”.

Many of the protestors come from the country’s wealthier classes, a demographic traditionally opposed to the ruling Worker’s Party. Demonstrators highlighted the country’s class divisions saying that Rousseff’s coalition instigated polarization by putting their nominal supporters, those who receive the popular welfare programs, against the rest of the country.

61-year old editor from Sao Paulo, Helena Alameda Prado Bastos, said the party was “inciting the people against the people”.

Opponents of the Worker’s Party complain that the government’s heavy spending and protectionist policies are what caused the slow-down of the 4 percent annual growth rate seen in the decade before Rousseff took office. Economists say that she failed to adjust policies when the global commodity boom ended, thus curtailing Brazil’s once-soaring export revenue.

While Rousseff herself has not been linked to any wrongdoing amidst the Petrobras scandal, many criticize her for her lax oversight towards the company’s corrupt practices, particularly when she was chairwoman prior to becoming president. The scandal saw Petrobras giving paid kickbacks to corrupt executives and some Worker’s Party members.

Economists worry that Brazil could lose its investment-grade status as it is expected to go into recession. Inflation has been on a 10-year high, and its currency, the real, has lost 22 percent of its value against the dollar.▪