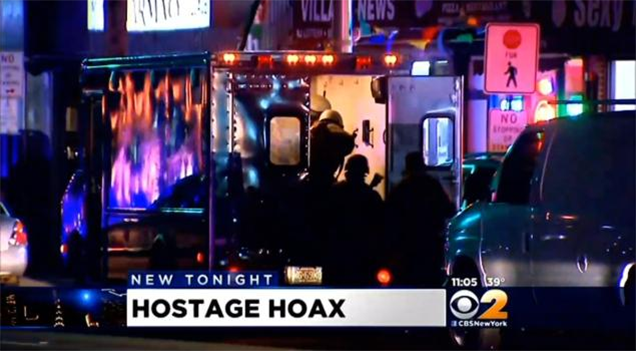 At a monthly meeting of gamers at Digital Press Video Games in Clifton, New Jersey, the members received an unwelcome surprise as SWAT teams descended on the store and a phone caller posing as the Chief of the Clifton Fire Department told them to step outside yelling someone had a gun.

Shortly after 7 PM on Saturday evening, the Passaic County Sheriff’s Office reports receiving a phone call alerting them to a potential hostage situation at Digital Press Video Games. The call reported men bearing shotguns corralling the hostages and already wounding several of them.

A SWAT team was immediately dispatched to the store with hostage negotiators, and the New Jersey State Police also reported in. Soon the small army of armed law enforcement surrounded the store and closed off Route 46 in both directions. The web administrator and podcaster of Digital Press, Frankie Viturello, said at least 40 members gathered for the monthly “NAVA” conference (North Atlantic Videogame Afficionados). It was here gamers discussed and traded games. 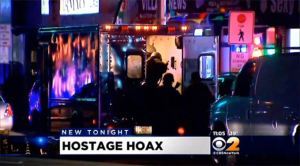 Viturello recounts, “Everything seemed normal to everybody up until the 8 PM hour when we noticed that Clifton police were converging on the streets outside of the store. We speculated that there was some type of armed conflict going on in one of the other businesses on the street, so we told the attendees to lock and stay as far away from the front entrance as possible and/or to converge in the basement of the store (where several of us were already hanging out and chatting about game-related things)”

About an hour later, police began to approach the store. At this time, a phone call came through to Digital Press. According to the female employee of the store who answered the call, it was a man posing as the chief of Clifton’s fire department on the other end. He began giving them directions, telling them to shut the front window blinds. Viturello says they complied, not knowing what kind of protocol there was for situations like this at the shopping strip. When the caller requested they step outside and yell, “Clear the area, somebody has a gun!” they realized something wasn’t right.

After Viturello moved in and contacted the police, they were taken outside, made to sit down for 20 minutes and be individually questioned, while the SWAT teams searched the building and got personal information of every member attending. No arrests were made, no one was injured, and the NAVA meeting was allowed to continue. Police are investigating the origins of the phone call and man posing as a fire department representative.

“Swatting” is the act of reporting a terrorist crime at the victim’s location, while staying untouchable and “safe” behind the phone. It began as an internet joke to prank livestreamers and YouTubers and then watch mayhem ensue, but has evolved into something far more serious. Calling in these false reports wastes the time and money of SWAT teams as they have no way of knowing which reports are false and which may be true. And while the callers may feel anonymous behind the phone, agents have tracked down and punished perpetrators in the past.

Here is Frankie Viturello’s full, first-hand account of the incident.

“The store is owned/operated by Joe Santulli, one of the curators of the upcoming Videogame History Museum in Frisco Texas. Joe is always present at these events and is a gracious and fun host to all. He gives back to the classic gaming community in every conceivable way.

Our “NAVA” events are monthly, open to all and run from about 2PM to midnight. It’s an incredibly friendly atmosphere filled with swap-meet style sales and trading of classic game merchandise, high score contests, tournaments and classic console and arcade free-play sessions.

Everything seemed normal to everybody up until the 8 PM hour when we noticed that Clifton police were converging on the streets outside of the store. We speculated that there was some type of armed conflict going on in one of the other businesses on the street, so we told the attendees to lock and stay as far away from the front entrance as possible and/or to converge in the basement of the store (where several of us were already hanging out and chatting about game-related things).

After the police didn’t disperse we started listening to local police bands on our smartphones (what a wonderful age of digital technology when you can literally just download an app and start listening in to police radio). We noticed that there was some chatter about the ongoing incident but they weren’t mentioning what business on the street it was happening at. (Turns out since it was reported as happening in Digital Press they likely didn’t want to raise any awareness to the potential “shooter” inside).

This went on for the better part of an hour as the police shut down the street and slowly SLOWLY converged on the establishment. At one point during that time an individual called the store claiming to be a representative of Clifton’s Fire Department and instructed an unsuspecting employee to close the store’s front window blinds. They willingly complied with the first request, which wasn’t too out of the ordinary (and, really, what do we know about protocol in these situations). Only when the caller then attempted to instruct the employee to go outside and shout something to the effect of:

“Clear the area, somebody has a gun!”

did they realize that something wasn’t right and that they were being coaxed into doing things to escalate the potential for police violence against each and every one of the innocent bystanders at the event.

As we listened on via the police scanners in the basement we heard this all playing out in parts still generally ignorant of what was going on outside or that it was actually us that was the target of a swatting prank.

After the mystery caller made his “big play”, Joe Santulli called the Clifton Police to explain and ask what was going on. He explained to them that this was a regular gathering/party atmosphere of friendly individuals and that there was certainly no shooting, gunman or hostage situation.

All that taken into account by the Police on hand, police protocol still dictated that they needed to enter the building to asses the threat in full riot gear with assault weapons, address each of us individually, take each person out individually, handcuff each of us, and sit us down in the business next door to Digital Press for approximately 20 minutes where we waited for them to clear the store, do a sweep, confirm that it was a hoax and then remove our cuffs and take our personal information down.

While it was certainly a very dangerous situation with a motivated individual who attempted to do everything possible to cause the potential for physical harm, I feel that the Clifton Police acted appropriately, were professional throughout and when the event was over some of them even hung around NAVA (which restarted immediately after the event) probably because they wanted to make sure that we were safe … but we could tell that they were interested in the crates of Atari and NES merchandise out for sale/trade.

The classic gaming community is a very tightly knit one and as much as some of us were momentarily rattled by the swatting, we were back to discussing potential themes for next month’s events within an hour of it happening.

We can’t publicly speculate on the individual responsible or their motivations during any police investigation into the matter, however the police are looking into the cause and individual(s) responsible.”