The developer that wanted to bring an NFL stadium and team to downtown Los Angeles abandoned its plans yesterday after their proposal went from top of the list to the bottom. 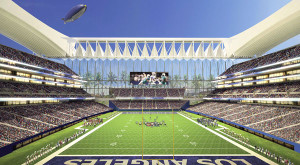 With no franchise tied to the stadium plans and two competitors also seeking to get an NFL team, the huge plans went into a steep decline in just a matter of months. The developer in charge of building the stadium was going to be AEG.

[quote_center]”We are no longer in discussion with the NFL or any NFL team,” said Ted Fikre, vice chairman of AEG.[/quote_center]

This is the same company who owns the L.A Kings and the Staples Center, two of the most popular attractions in the Los Angeles area.

AEG had spent five years and around $50 million in attempts to bring or add an NFL team. Now the company says they will focus on other downtown L.A projects.

The announcement from AEG now leaves only two contenders in the race for an NFL team. These two contenders happen to be close to L.A. One is a proposal in Inglewood, backed up by the owner of the St. Louis Rams, Stan Kroenke. The other in Carson with the support of the San Diego Chargers and Oakland Raiders.

The project would’ve been something unusual for the NFL since most of their venues are located in suburbs and not downtowns. The project appeared to gain life back in October when AEG received an extension for its deadline to bring an NFL team. The chairman will allow that extension to expire next month since the plans have been dropped.

Farmers Field, the name of the proposed stadium for downtown L.A would’ve been ideal, according to Michael Eisner, former chief executive at the Walt Disney Co.

”It just felt to me that if we could pull this off, particularly in the downtown area, that the renaissance of Los Angeles … could be enhanced,” he said.

”I’m a Disney guy,” Eisner said. ”I’m looking for the end of the movie to be happy.”

The mayor of L.A also spoke about the dropped plans, he said that his priorities are to revitalize downtown L.A but the City Hall will be happy to cheer for a team near their border.

In Inglewood, site of one of the remaining proposals. The City Council bypassed various hurdles to provide a stadium for an already approved development underway at a former racetrack venue.

Carson, the other site, gathered enough signatures for a ballot initiative that would allow a Raiders-Chargers to play in the same stadium.

The NFL has reminded all candidates that the decision will come from them and that the league alone will decide which team will move or be added to the Los Angeles area.