Barcelona destroyed Villarreal on Wednesday to advance to the final of Copa Del Rey. Lionel Messi, Neymar and Suarez were at their best and displayed some beautiful football. The second game between the two was just an exhibition match for Barca. Neymar scored two goals, one provided by Messi. Suarez added another to seal the game. The aggregate ended 6-2, with Barca being generous as they could have easily scored 2 or 3 more goals.

It was all great until something happened in the 40th minute, midfielder Sergio Busquets was seriously injured when Tomas Pina stuck his foot in his ankle and caused it to roll over. We know Busquets as the type of player to exaggerate a foul to get his opponent a yellow but this was not the case, this was a real injury. He looked in serious pain and called for team doctors right away. Pina’s slide did not look to be intentional but he was later sent off for a dirty tackle on Neymar. 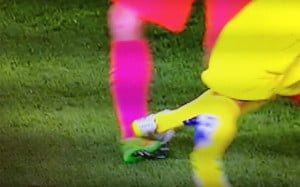 Busquets was immediately stretchered off. Yesterday, the bad news came in and confirmed the severity of the injury to his right ankle. He has already been called off for Sunday’s league game against Rayo Vallecano. A game that is extremely important to keep up the chase on Real Madrid who is currently up by 2 points with 13 games to go.

Who Should Fill In?

If he’s out for a while, it would be disastrous for Barca, who are now short of midfielders to compete in the many tourneys they’re still in. Busquets is a very underrated player and his role is very important to the team. He drops back when the teams needs defenders and can also make precision passes from the midfield on counter attacks.

Barca are in deep trouble and can’t shop for players since they’re currently serving a sanction from FIFA that prevents them from buying and transferring players. The position is now lacking players.

Javier Mascherano is one of the options to move up but it looks like Luis Enrique prefers him as a central defender. Another option would be moving up Pique, the problem is that this would create a hole at his current position. He would be missed just as much as Javier Mascherano as central defender. The team must be regretting the decision to loan Alex Song to West Ham right about now. He wasn’t that good in his time with the club but would definitely contribute to the position right away. Mathieu? Bartra? They will likely try out new positions.

The time is ticking and for now Barcelona hopes Busquets can recover as soon as possible. If not, they can start kissing goodbye to some of the aspirations and goals they have set for this season.

What do you think Barca should try to do with their midfield problems? Will Barca win anything this season?