Reports from relief teams in the outer islands of Vanuatu painted a scene of pure destruction after a powerful cyclone passed through the South Pacific island nation, taking down buildings and killing people.

Disaster relief teams struggled to establish contact with the islands as the cyclone was tearing through, with winds of more than 185 miles per hour. The category five storm destroyed boats, bridges, and washed away roads as it arrived late on Friday and into Saturday.

The official death toll right now is eight killed and 20 injured. A number which will most likely rise as relief teams and volunteers begin to search in the heavily affected areas.

One of the relief teams, The Australian Red Cross, tweeted out that it had reports of “utter devastation” on the southern island of Tanna, with the majority of homes completely flattened. Tanna, a town 125 miles south of Port Vila, was one of the most affected areas. Its 29,000 inhabitants took the full force of the cyclone, which was a category 5 storm at the time.

At the capital, where the sea surged as high as 8 meters (26 ft), a clean up effort is already taking place. This was also a heavily destroyed area with 75 percent of the houses damaged or completely destroyed.

“Things in Port Vila are improving, people are returning to the market and getting on with the job of starting the clean-up, but the key thing is we still have no contact with other provinces,” Tom Perry, from aid agency CARE Australia, told Reuters by telephone from the capital.

“That’s of grave concern because there’s no real sense from anyone of what the impact has been, but we know in the south in particular, it sat under the eye of the storm for hours.”

The capital right now has a 6 p.m. to 6 a.m. curfew, to prevent looting. Even with the curfew, there have been unconfirmed reports of minor looting of hardware equipment.

The CEO of Red Cross Vanuatu, said the stores and shops were already low on supplies because people stacked up on food and other items before the storm. Sadly, these supplies were lost when the storm destroyed people’s houses and everything they owned.

Citizens and relief teams are worried that diseases like malaria and dengue fever spread throughout the population that have no shelters or houses.

New Zealand and Australia are doing everything they can, with military flights containing water, medicines, sanitation kits and temporary shelters. These are being provided to the estimated 10,000 left homeless by the destructive storm. Commercial flights are also scheduled to resume today, which will bring more aid and send out the tourists at the islands.

Vanuatu, one of the poorest nations in the world, suffers from constant earthquakes and tsunamis, and has several active volcanoes. That’s not all, the storms and rising sea levels are also a threat.

Australia and New Zealand have promised to aid the poor islands with around $5.6 million. Britain, has also joined in on the aid and offered $2.95 million in assistance. 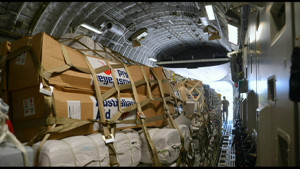