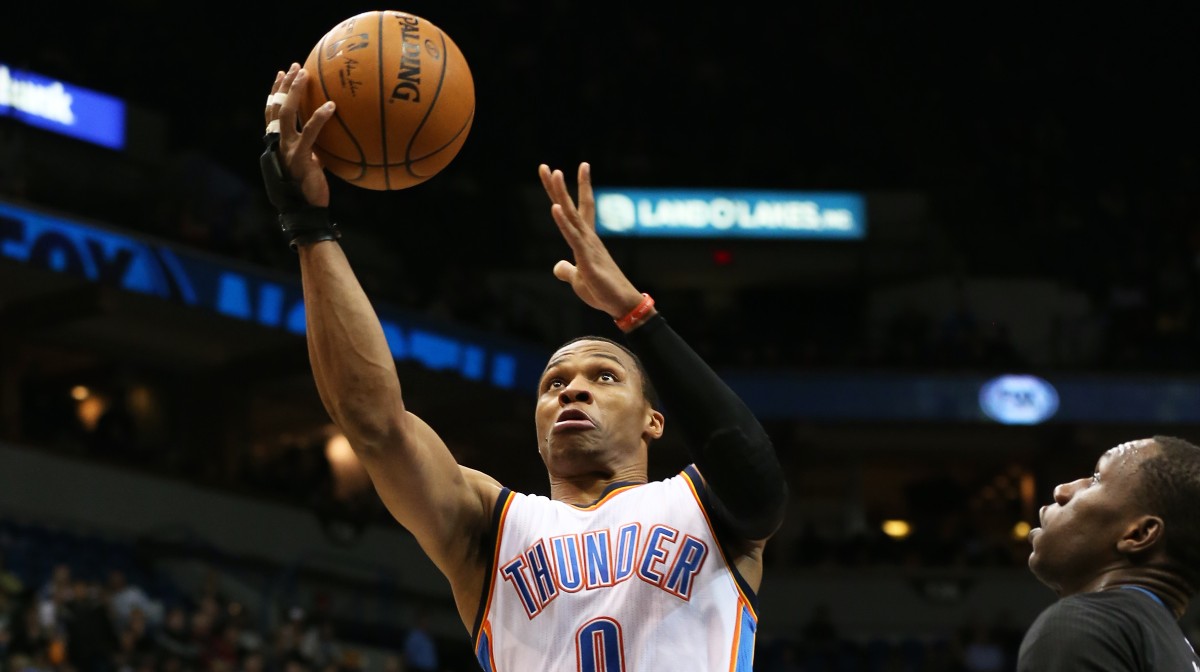 Another day, another triple double for the Oklahoma City Thunder star.

The unstoppable point guard collected his sixth triple in double in eight games and scored almost half of his total points in the last quarter, to help the team pull away from the last place Minnesota Timberwolves on Friday night. He also had eight turnovers, but what he did erased those mistakes. After the game, he said this:

”I do know one thing, I need to stop turning the ball over, I can tell you that much,” he said. ”It’s frustrating trying to make passes and turning it over, but at the same time, we’re winning. I’ll go back to the drawing board and take care of it.”

”He is just displaying his all-around game and doing it at a consistent level,” Brooks said. ”It seems like every night, he is right at those numbers, and those are signs of a very special player.”

Westbrook took some rest with 2:13 remaining in the game and it seemed like he was going to fall short of another triple double, but a scoring change gave him his 10th rebound to make it six. He has eight triple-doubles this season and 16 total in his career. What a great year he’s having.

Andrew Wiggins, who played against Westbrook tonight, says he took notes of what he’s doing and what it takes to get to where he’s at right now. The young Timberwolves guard had a solid night with 19 points.

The recently acquired Enes Kanter, had 23 points and 15 rebounds. While Waiters and McGary had 12 apiece.

The Timberwolves were a force tonight, something we don’t see very often. They hung on until the fourth when Wesbrook’s 3 pointer increased the lead and gave the Thunder a commanding 95-82 lead.

Russell didn’t have a fast start like he usually does. He got going after a second quarter buzzer beater, then from that point on, he racked up the numbers.

Center Nikola Pekovic sat out with a sore right ankle. Power Forward Kevin Garnett missed the game with a sore knee. The Timberwolves forgot about teamwork as they had only one assist in the first quarter.

Power Forward Serge Ibaka sat out with a sore right knee. Mitch McGary, got his first career start in Ibaka’s place. Dion Waiters started in place of Kyle Singler, who had started all 10 games since he was acquired from the Detroit Pistons in a three team deal at the trade deadline.

Ricky Rubio left the game in the third quarter with an ankle injury. He did not return and his status is unknown.

Will Russell get another triple double?