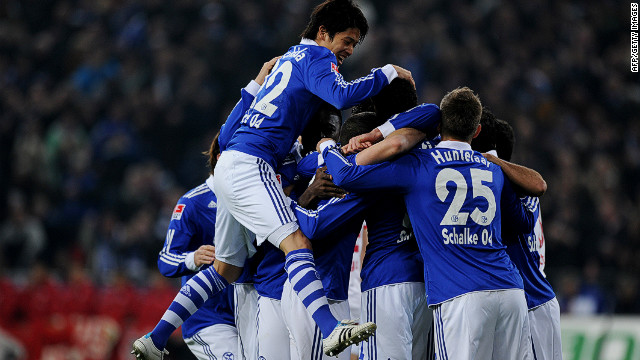 Full of heart and motivation, Roberto Di Matteo’s Schalke team came to Santiago Bernabeu on Tuesday night with the intention to win. The result? The German team beating Real Madrid 4-3.

This score is a reflection of a combination of factors. It all boiled down to the poor performance by Real Madrid, and the spectacular team work Schalke brought to the table. Carlo Ancelotti, Real Madrid’s coach commented “We had problems in all aspects of our game,” Madrid coach Carlo Ancelotti said. “We have to say it clearly, we are playing very badly.”

Despite this, Real Madrid advances to the Champions League quarter-finals. Also, Ronaldo passes Messi as the leading goalscorer in European club competitions,

The game began with Christian Fuchs scoring the opening goal, stunning the crowd at the home game. Responding to this, Ronaldo drills in a corner with hsi head coming from Real Madrid’s center-mid, Toni Kroos.

The German team quickly shrugged this equalizer off, when Klaas-Jan Hunterlaar scored, making the game 2-1. Huntelaar showed his skills off, and was also a former Real Madrid striker.

Ronaldo was not finished yet. With his 75th goal in the Champions League, he heads the ball in. Moments later, Karim Benzema slides by two Schalke defenders, gaining a 3-2 lead at the 53.

However, the two goal scorers for Real Madrid could not play every position for their team. Leroy Sane hits a curling ball over Casillas 4 minutes after Benzema scores. This equalizes the score, both teams having 3 goals.

In the 84th minute, Huntelaar showcases his skills when he strikes one right into the goal, bringing the score up to 4-3 However, the German team was hungry for more.

Two more shots on Real Madrid’s net were made, but Casillas made stunning dives to prevent Schalke from winning 5-3. This would be devastating to the team, after flaunting their 20-1-5 record. However, the German team was still eliminated, even after winning the game. Coach Roberto Di Matteo says “We are happy we won, but we scored four goals and were eliminated.”

One of the components that led to Real Madrid’s loss was Iker Casillas allowing three of Schalke’s goals. However, this was not just the goalkeeper’s fault. Casillas did save two goals in the closing minuted of the game, saving the team from being eliminated. The whistle never sounded so good at that time.

Two players who usually perform extremely well are Gareth Bale and Alvaro Arbeloa. However these players could not stop the Di Matteo’s men from scoring.

The astonished team does have one more match to prepare for, before the Clasico. Will they be able to bring it all to the table, based on the performance on Tuesday night against Schalke?

Real Madrid is currently trailing behind Barcelona with 61 points. The top 5 teams in the Liga BBVA are (First to Fifth) Barcelona, Real Madrid, Ateltico Madrid, Valencia, and Sevilla.