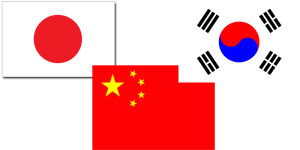 The foreign ministers of China, South Korea and Japan will meet Saturday in Seoul, the capital of South Korea. This will be the first time in 3 years that the countries meet, in an effort to restore cooperation between the three nations and talk about the dispute for the islands. This was confirmed by South Korea’s foreign ministry.

The ties between the three nations have lost power because two of the parts see Japan as not willing to admit atrocities committed in times of war. Both China and South Korea currently have territorial disputes with Japan.

All three nations have shaky ties, especially the one between China and Japan. Their relations have shown signs of warning in the last few months. South Korea’s foreign ministry said officials of these three countries had already met not too long ago to try to put the cooperation back in track.

“The meeting is the first in about three years since April 2012 and is expected to lay the foundation for restoring a mechanism for three-country cooperation,” South Korea’s foreign ministry announced on Tuesday.

The annual meetings which these nations used to have since 2008 have been put on hold since early 2012. The countries leaders now look to reestablish these meetings in hopes of restoring cooperation. Which sounds like a good idea because all three are economic powerhouses.

If this meeting goes through, it would signal progress among the three. Even though, South Korea and China are currently pressuring Japanese leaders to take steps to show they fully acknowledge the country’s history during World War Two.

South Korean President Park Geun-hye, who has yet to have a sit-down meeting with Japanese Prime Minister Shinzo Abe, said this month that the Japanese are an important partner which share the principle of democracy and market economy.

“Now it’s time for Japan to courageously and sincerely recognize historic reality and go hand in hand with South Korea as partners to write a new history for the next 50 years,” Park said on March 1.

South Korea has accused Japan many times of trying to downplay an apology issued in 1993 to Asian women that were forced to work as sex slaves during times of war. These women served in brothels and were known as  “comfort women”.

The South Korean President and the Japanese Prime Minister met for a short moment with United States President Barack Obama, who tried to fix the ties between the two, at a meeting between heads of government about a year ago.

All three countries have disputes over islands. Both China and Japan are demanding a tiny group of islets in the East China Sea. Then, there’s another dispute with South Korea and Japan over some tiny islands.