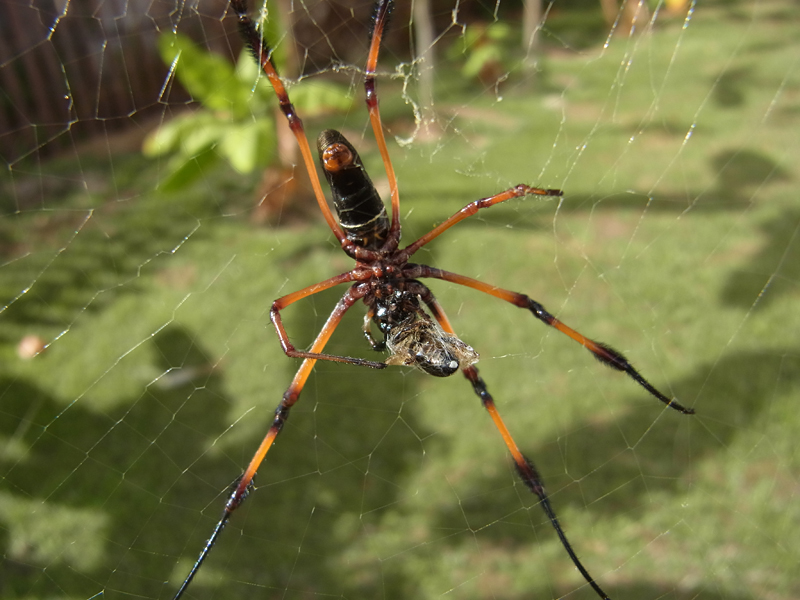 Researchers from the Center for Biomedical Technology (CBM) at the Technical University of Madrid have produced a new fiber from the spider silk of the Nephila inaurata (pictured above). Inspired by a 19th century method to produce a strong thread made of silkworm, they have been able to produce fibers much stronger than they would have been in nature. The silkworm threads called hijuela made the region of Murcia famous in its time. The traditional process consisted of using an acid liquid, generally water and vinegar, to deform the glands that produced the silk. By optimizing the pH value they were able to maximize the strength of the fibers which have significantly larger diameters than the natural ones, thus creating what has been baptized as hijuela de araña.

All spiders, big or small, venomous or not, produce their own silk. Though the silk is mostly known for its use in webs to capture prey, there are up to seven types a spider can produce, with their uses ranging from finding a mate to nest construction. Along with being incredibly versatile, spider silk on its own already posesses a unique combination of high strength and toughness that is comparable to strong metals.

To explain, strength and toughness are not the same. Strength measures how well a material can resist being deformed from its original shape. Toughness on the other hand measures the energy required to crack a material. For example, a glass may require a lot of energy to break, but it is not very tough and shatters very quickly when it does deform. Rubber on the other hand is not as strong and can be easily stretched but it is tough as it will have to be stretched a lot before it breaks into pieces.

Unfortunately though, it is incredibly difficult to extract substantial amounts of the silk. In fact, the largest known piece of cloth made of spider silk is 11 by 4 feet and took a million spiders and four years to produce. This is why over the years there have been various attempts to produce artificial fibers with similar properties. Attempts among others have ranged from genetically modifying goats to harvesting the silk from bacteria.

The work of the CBM is part of a line of research to obtain silk-based biomaterials. Researchers hope that by gaining a better understanding of the procedures necessary for obtaining these materials, it could in principle replace natural silk in regenerative medicine.