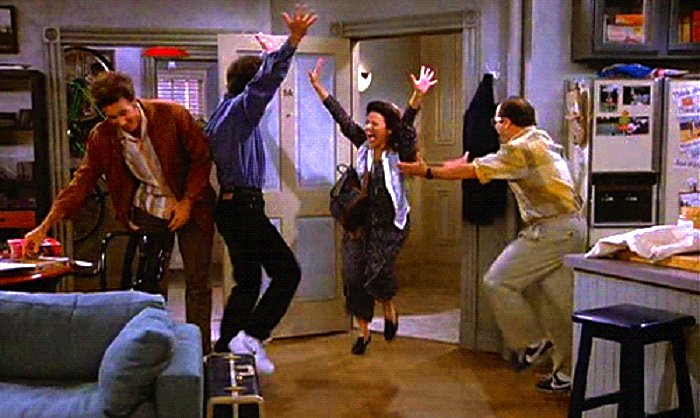 The news has come out that Netflix has passed on streaming “Seinfeld” but that does not mean the show isn’t in the middle of a huge bidding war with other top companies. To get the streaming rights for this classic comedy, it might cost over $90 million, that is considering there are 180 episodes of the sitcom.

Since 1995, “Seinfeld” has earned over $3.1 billion in television syndication deals through the years, so earning $90 million for 180 episodes is quite amazing. Sony Pictures TV is looking at places like Amazon and Hulu, as well as other Internet companies like Yahoo, and right now it’s unclear who is showing interest in purchasing the streaming rights. Which ever company purchases the streaming rights will have access to stream the entire series online, which is great for fans of the show who have to currently watch online via sometimes illegal websites.

Jerry Seinfeld and Larry David both are worth millions of dollars, so no matter what the deal is for the streaming rights, they are sure to be set for the rest of their lives and beyond with this new deal. When you look at other popular comedy shows, Netflix paid $500,000 an episode last year for “Friends” so it’s not hard to believe that “Seinfeld” could make even more than that per episode, especially with the new viewers the show has earned over the years through syndication.

Seinfeld was named Forbes’ highest earning comedian in 2013, which was in part due to all of the television syndication deals that the show has had since 1995. It’s no question that if “Seinfeld” gets a streaming deal, this will almost certainly cement Seinfeld as the highest-earning for many more years to come. The only factor that will ultimately determine the price for the streaming rights is how long the contract is good for, whether it’s 5 years or 10 years, and maybe even 15 years. The longer the contract deal is, the bigger the payday will be, since that means the company or network will have exclusive streaming rights for that amount of time. The bidding war might come down to which company wants the rights the longest and which company is willing to pay for those rights the longest. If the deal is only for a few years or 5 years, then the streaming rights will likely be around $40 million, which is still really good for a show that has been around as long as “Seinfeld” and that has been off the air for years as well.