Tesla adds autonomous driving for its Model S electric sedans via an over the air software update. 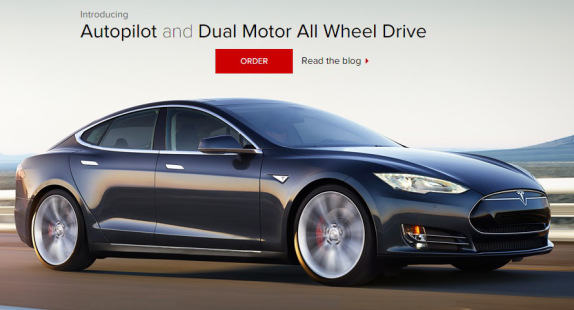 Just like your cell phone, the Tesla Model S can receive software updates over the air to add features and new abilities. Elon Musk, Tesla CEO, has just announced a new over-the-air update for the Model S which will add self-driving features. The ‘autopilot’ update will roll out in 3 months to Model S owners. The self driving abilities will be available for those who opted for the “tech package” when they were buying their cars.

At the start, Tesla’s autonomous driving features will only be available on the freeway, where the car detects the white lines in the road to keep itself between them. The main feature of this update is the super-cruise control, in which the car maintains its distance from the car in front while simultaneously steering to keep itself in the lane, and it can even detect and avoid pedestrians. Future updates will bring more features, such as the ability to drive the vehicle automatically to a place to pick you up using your smartphone, or having it park itself in your garage when you get home.

While most cars age over time, with newer cars constantly getting better features, “[the] Model S gets faster, smarter and better as time passes,” says Tesla in a blog post.

The company has already done amazing things with their cars to improve their functionality and performance, and they say that they want to improve cars in ways that most people cannot imagine.

New safety features include automatic braking to help to reduce impact in the event of a collision, further improving an already great safety rating. The new Valet mode will slow down the maximum driving speed and disable the display of personal information when you hand your car over to a valet.

Besides the autonomous features, the new update also delivers the promised end to range anxiety, in the form a range calculator, which will allow the car to calculate how far it can go on a charge and find a route that guarantees you not to run out of charge. Tesla has upgraded the audio codec for hi-fi, so music listeners can expect better audio quality from the internet radio.