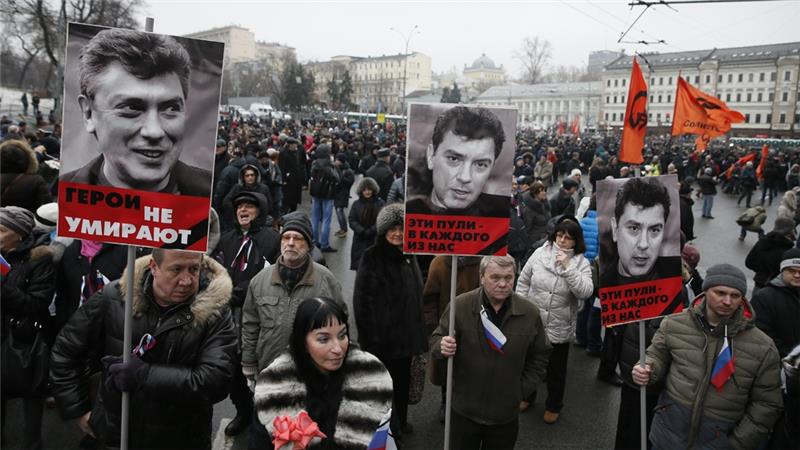 Two men are being held in connection with the killing of Russian opposition politician Boris Nemtsov, 55, a week after he was shot dead near the Kremlin.

The pair, identified as Anzor Gubashev and Zaur Dadayev, both come from the North Caucasus region, an area in southern Russia known for its volatile insurgency.

Government television network Rossiya-24 reported that according to the head of Russia’s federal security service Alexander Bortnikov, the murder is in the process of investigation and Russian president Vladimir Putin had been informed of the arrests.

Nemtsov, a strong critic of Putin, was reported to have been shot four times in the back by a gunman inside a passing car while he was walking to the Kremlin on February 27.

It is not yet known whether these men are suspected of shooting Nemtsov. The prime witness to the murder, who recently returned to Kiev, said to the media she was unable to pinpoint Nemtsov’s shooter.

An opposition activist who welcomed the arrest, Ilya Yashin, inquired for more information to be released about the pair. He said that “the execution of the investigation had not inspired any optimism, but the fact that there have been arrests inspires some optimism”.

Nemtsov was murdered two days before he was due to lead an opposition rally in Moscow. A memorial was held in its place, which thousands took part in.

Many suspect the killing, which took place in a highly secured area near the Kremlin, would not have been feasible without the participation of officials. They have qualms that the murder was done in an attempt to coerce other government opponents and dissenters.

Alexei Navalny, another opposition figure who was released from a two-week period in jail for organizing an anti-government rally, blamed the country’s “political leadership” of ordering the assassination.

Associates of Nemtsov said he had been in the process of writing a report containing what he claimed as proof of Russian military involvement in eastern Ukraine.

He was deputy prime minister to Boris Yeltsin in the 1990s, making him a tainted figure to some Russians.

Nemtsov had written several reports connecting Putin and his connections to supposed corruption and was one of the most well-known figures in Russia’s small and often besieged opposition.

In 2003, Nemtsov claimed that up to $30 billion of the approximate $50 billion budget for the Sochi Winter Olympics had gone missing. The Kremlin has denied this.

The murder was condemned by the international community with French president, Francois Hollande, labeling it as an assassination. Meanwhile, UK Prime Minister David Cameron called for “rapid and [transparent]” investigations.

Zhanna Nemtsova, Nemtsov’s daughter, told CNN on Friday that her father died a hero, and asserts that Russian authorities are responsible for his death.

She said she is doubtful that those responsible for her father’s murder will be brought to justice.

“Russia has crossed the line after this murder and people will be frightened to express ideas contrary to the official standpoint”, she claims.

Putin has expressed condemnation for the killing calling it a “provocation” and vowed to do everything to convict those involved in the “vile and cynic murder”.▪