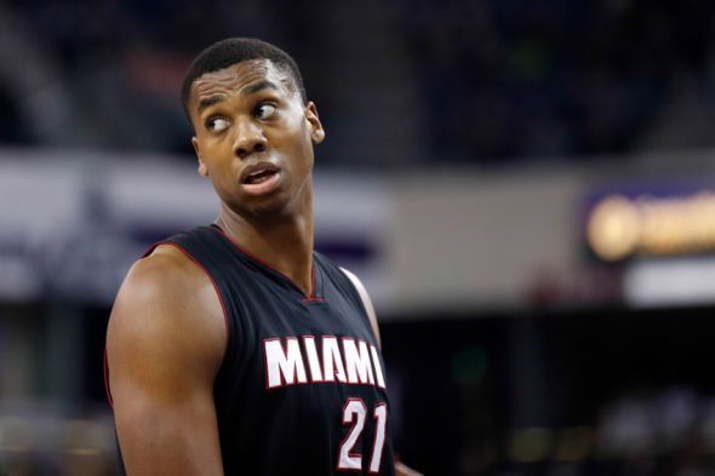 Miami Heat’s young center Hassan Whiteside was ejected Monday for the second time in two weeks for an unnecessary shove on Boston Celtics big man Kelly Olynyk late in the third quarter. The Heat lost 100-90 at home, and Dwyane Wade had some words to say to the young and inexperienced Whiteside.

Miami, who is currently fighting for a spot in the playoffs, is already playing with a very thin roster.  The starting frontcourt of Chris Bosh and Josh McRoberts, has been out for most of the season. Especially McRoberts, who only played a few games before he was completely shut down by the team. The rest of the starting roster is also hurting. Luol Deng, Udonis Haslem, Goran Dragic and Wade himself have been battling injuries throughout the season. Not even Whiteside has escaped from the injury fest; he missed last game with a minor injury.

While the team is fighting and close to having a playoff spot, the team needs all the players they can get. Especially Whiteside, who has given the Heat a much needed spark at times. Even though he was struggling in this game, the Heat needed his presence. Needless to say, Wade was furious about his last ejection. This is what he had to say:

‘’He’s had enough veteran advice. There comes a time where you have to do it yourself. There’s only so many words people can continue to say to you. You gotta do it. Not for you, you gotta do it for the other guys in here that you see sacrificing. That you see out there playing hurt and all these things that are going on. You’re part of a team. You’re part of an organization. We all have our moments, selfish moments. But you can’t continue to keep having them, because you gotta be reliable and you gotta be able to be counted on. And right now, if he continues to act that way then he’s not reliable.’’

Strong words from the All-Star veteran. Whiteside will most likely be suspended and has been fined $40,000 for his two recent ejections. The center is an important piece to the team and they hope Wade’s strong words will set him straight. The Heat play the Nets tomorrow for a chance to get close to the 8th seed.