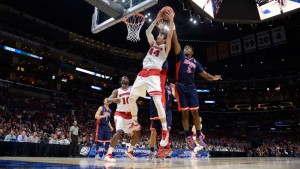 The Wisconsin Badgers are in the Final Four again.

“Frank the Tank” provided 29 points, Sam Dekker added his second straight career high of 27 and the West Regional’s top seed sent the No. 2 Arizona Wildcats packing 85-78 on Saturday to reach consecutive Final Fours for the first time in school history.

The Badgers and Wildcats entered the game with the same record, 34-3. Wisconsin ended up denying Arizona a Final Four appearance for the second straight year. Last year, it was the same story when the Badgers eliminated them with a one point win in overtime.

Bo Ryan and his team will now travel to Indianapolis next week, hoping to play Kentucky once again, who barely eliminated them last year with a one point victory in the Final Four. 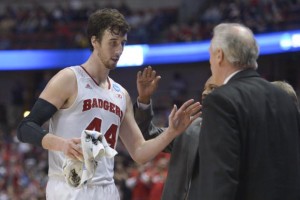 Brandon Ashley and Rondae Hollis-Jefferson each scored 17 points for the losing side, who once again failed to give its head coach Sean Miller a trip to the Final Four.  T.J. McConnell added 14 points in his last college basketball game and Gabe York and Kaleb Tarczewski had 11 a piece.

Just like last year’s game, Kaminsky was huge for the Badgers. He did everything he could to evade the Wildcats suffocating defense. Arizona put its tallest and biggest players on the 7-footer, but there was no match.

The Badgers hit an impressive 10 of 12 from beyond the arc in the second half and outscored the Wildcats 30-3 from the three point land.

Arizona went all in the last 4 minutes of the game, trying to take advantage of some of the Badgers mistakes and tried to pass and score safely.

The Wildcats twice got within five points in the last 2 minutes, but their rally was stopped by Dekker, who nailed two three pointers to seal the game.

Kaminsky led the Badgers offense at the start of the second half; scoring 8 of their first 14 points as the team took a 44-36 lead.

The Wildcats would then go on a 10-3 run to make the game close again. But it wasn’t for long as Dekker was making it rain with 3 pointers and gave the Badgers a 10-2 run and a 57-48 lead.

Arizona led 33-30 at the half, after a terrible start in which they missed 7 of 8 field goals.

The Badgers got off to a great start with a 10-2 lead but Arizona kept fighting back and it got a little heated at one point when Tarczewski and Kaminsky were playing aggressively against each other. They ran their mouths from time to time, especially after Tarczewski dunked on Kaminsky, who then took the ball down the court and scored.

– The Wildcats have not advanced to the Final Four in 14 years, which was the year they lost to Duke in the title game.

– The Wisconsin team has won 10 straight games. Packers star QB and his girlfriend sat behind their bench for the second straight game.

– Wisconsin travels to Indianapolis to play in the Final Four. Will it be against Kentucky?

– This was the first time in NCAA Tournament history that schools have played each other in consecutive years with both being top-2 seeds.