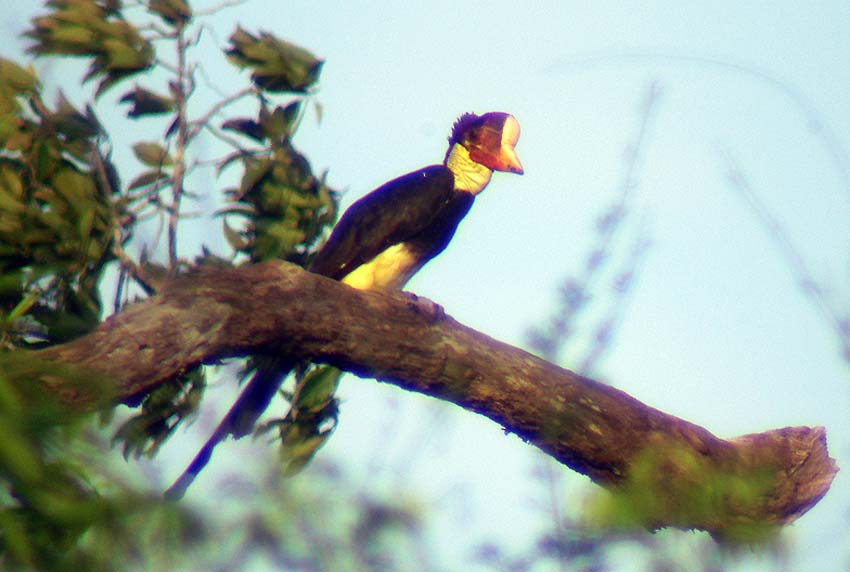 The Borneo rainforest bird is one of the world’s strangest animals, with a huge head, a 6 ft wingspan and a scary call that sounds like an evil laughter. The bird known as the helmeted hornbill is being driven towards extinction by an increase in the Chinese black market for its ivory.

The bird, also known as ‘the farmer of the rainforest’ for its important seed spreading role has becomed the latest victim of wildlife crime, according to a report coming out this week by the Environmental Investigation Agency (EIA).

The hornbill’s ivory is now worth three times the amount than that of elephants. Poachers are taking advantage of this and the situation is now out of control. Hornbill expert Yoki Hadiprakarsa warned the residents and poachers about the dangers.

[quote_center] ‘If no one pays attention, this bird is going to become extinct.’[/quote_center]

The ivory from this bird has increased its value because China’s wealthy middle class loves carved items made from this material. With elephant and rhino horn being hard to find, the demand has increased for this bird’s ivory and now the masses want it. The Environmental Investigation Agency found out about this after they discovered that traffickers were dealing instead in ‘red’ ivory, which comes from the bird.

The material now sells for as much as £4,000 a kilogram, three times the value of elephant ivory.

The agency doesn’t have a real number on the impact of poaching for these birds. Around 6,000 are killed every year just in one region, Kalimantan. Places like Sumatra, Borneo and the Malaysian peninsula still don’t have an estimate.

The director of the Indonesian Hornbill Conservation Society, said: ‘A few years ago helmeted hornbills were common in the West Kalimantan, but on my last visit I didn’t see any and local villagers said they hadn’t either.

Poachers are pushing deep into the forest to kill these birds. Their procedure is to shoot the bird then decapitate it. A poacher with experience can easily bring as many as 20 hornbill heads in one day. These heartless humans then sell the head for about £300 each to a smuggler or middle men that exports them to Hong Kong and other places in China.

Environmental Investigation Agency campaigner, Debbie Banks, expressed her disgust by saying: ‘What is sickening is this trade has nothing to do with tradition or medicine, it’s purely about demand for luxury vanity products.’ So true. We can only hope that the demand for this material decreases and the bird is left alone. 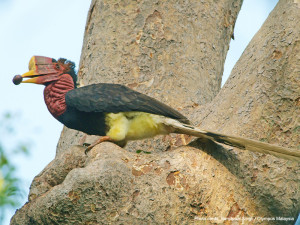 Hornbill in the wild