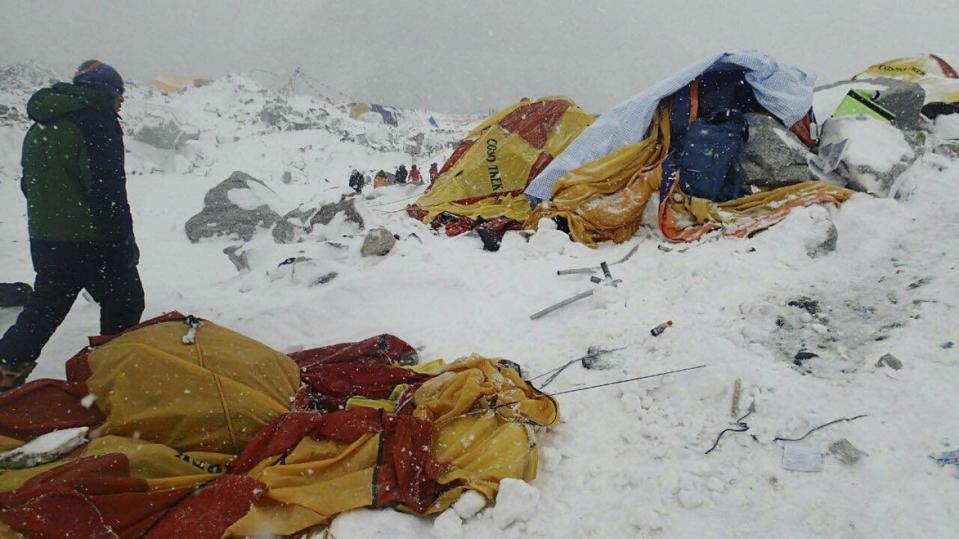 An avalanche started by a massive earthquake swept across Nepal’s Mount Everest region on Saturday, killing at least 10 people there, most of them climbers and guides. The avalanche rolled through a section of the mountaineering base camp, and left an unknown number of people injured and missing, officials said.

Climbers that were looking to go to the top of the world’s highest peak now have no routes.

The deadly avalanche began on Mount Kumori, a 7,000-meter (22,966-foot) -high mountain close to Everest, gathering strength as it headed toward the base camp where climbing expeditions have been preparing to make their risky attempts in the coming weeks, said Ang Tshering of the Nepal Mountaineering Association.

The avalanche or a series of them, swept through the base camp, a village which is a place to stay for climbers, guides and other workers. The snow flattened at least 30 tents, Tshering said. It it still not exactly known how many people are injured or missing because the communication to the famous mountain are very limited at the moment.

The few that communicated were through Internet messaging services, they described a scene of terror as snow and ice plowed through the base camp. 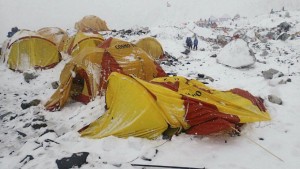 Azim Afif, the 27-year-old leader of a climbing team from University of Technology Malaysia, said in an interview through the messaging app WhatApp that his group was caught offguard by the avalanche when they were in their tent waiting for lunch. They noticed something was wrong when the table began shaking. When they looked outside, they saw “a wall of ice coming towards us,” and heard the cries of Sherpa guides shouting for people to run for their lives, he wrote. “We just think to find a place to hide and save our life.”

The small team is now together in one tent to make sure they’re all close to each other if something happens again.

The day has been a long one for survivors, who have joined rescue teams in the search for the ones missing.

Gordon Janow, the director of programs for the Washington-based guiding outfit Alpine Ascents International, said from Seattle that his team had come through the avalanche unscathed. Their first goal was to deal with the devastation at base camp, he said, and they would then try to create new routes to help climbers stuck above the treacherous Khumbu Icefall.

“Everybody’s pretty much in rescue mode, but this is different from some independent climbing accident where people can be rescued and taken somewhere else,” Janow said. “I don’t know where somewhere else is.”

Reports from other areas near the mountain say that they’ve also encountered other avalanches in the north but they got out safely and went back to a lower camp.

The deadly 7.8 earthquake struck at around noon Saturday about 80 kilometers (50 miles) northwest of Nepal’s capital, Kathmandu, just over a year after the deadliest avalanche on record hit Everest, killing 16 Sherpa guides on April 18, 2014. The tragedy has left many injured and hundreds more dead. The scene is chaotic at the moment and the United States has promised to send rescue teams and a one million dollar help to start off the efforts.