Tax season is upon us, and with that comes a lot of people wondering what the top earners in this country are making. Well, the Internal Revenue Service just released a report that said the top 400 people who pay taxes averaged about $335.7 million in income combined in 2012. This group of the top 400 taxpayers, might not always be the same individual people year in and year out, but the top 400 people earned more than in the 2010 study. 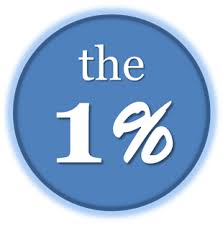 The study also showed that the top 400 earners also paid more in taxes than prior years, with about $56 million going into the system, although that wasn’t nearly as much as their income. It averages out to about 16.7 percent of their income that was paid into federal income taxes, which was less than 18.04 percent the top group paid in 2010, and in 2011 that was 17.11 percent. If you want to look at those numbers even harder, then you figure out that only about 75 percent of the top 400 earners paid under 20 percent in taxes in 2012. 32 of the top 400 filers ended up paying less than 10 percent in federal taxes, which is fairly high considering the amount of money these earners made on their adjusted gross income, or AGI for short.

The top 400 filers also have a lot of investments, which is part of the reason why the tax rates for this group is fairly low, compared to the average person. Investment income a lot of the time is taxed at a much lower rate than the normal salary tax, with salary taxes now sitting at 39.6 percent. In the 2012 study, less than 8 percent of the top 400 filers adjusted gross income was related to salary and wages, while the other 92 percent of the AGI was through investments and other types of financial resources.

The 2013 tax information is what really will be curious to see, because the rich have seen tax hikes, including the Medicare tax rate. There was also a Medicare tax to investment income starting in 2013, so this means that the date released next year will likely show an increase into the amount of money the top 400 filers put into the federal government system. It will also be interesting to see whether or not the adjusted gross income for the top 400 filers goes down due to the increase in taxes for what some consider “the rich” group, and then see how that impacts investments since the new tax will be calculated like Medicare tax. The 2013 data from the IRS will likely come out sometime in April of 2016, which will be shortly before the next presidential election, and that might play into the race heading into November 2016.