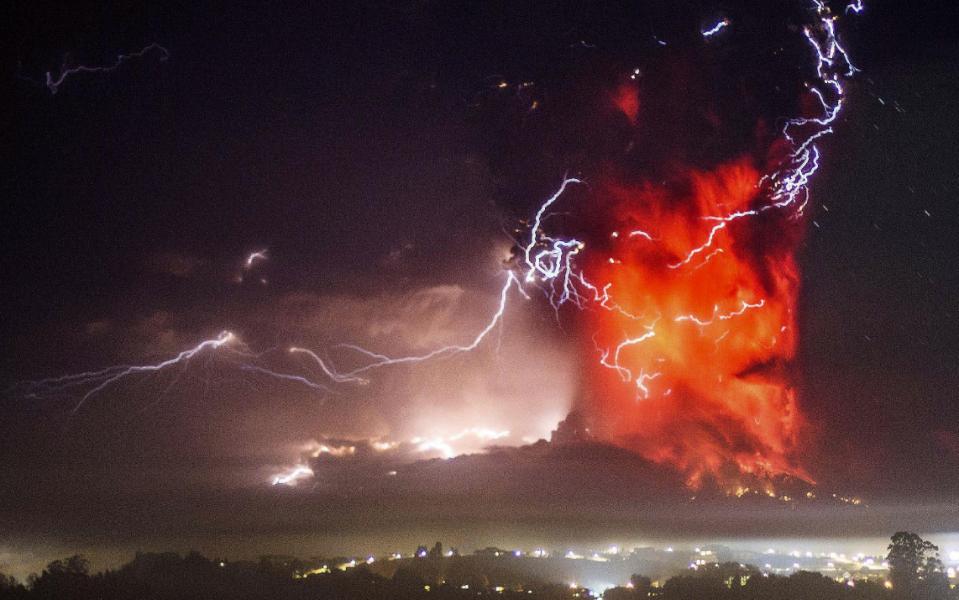 Blasts from the Calbuco volcano in southern Chile sent tons of ash into the sky, increasing concerns that the dust could contaminate water, cause respiratory illnesses and delay more flights.

The volcano first erupted Wednesday afternoon for the first time in more than 40 years, letting out a huge cloud of ash more than 6 miles (10 kilometers) high. Authorities and emergency officials were taken by surprise and alerted residents as fast as they could.

Calbuco had another blast early Thursday with lightning surrounding the cloud. It looked like a scene out a movie, as the dark sky turned reddish orange by the explosion.

As the ash cloud spread Wednesday, “people went into a state of panic,” said Miguel Silva Diaz, an engineer who lives in Puerto Montt, a city about 14 miles (22 kilometers) from the volcano. “Then, at around 1 a.m., I heard a loud noise, as if somebody had detonated an atomic bomb.”

The volcano has not caused any deaths and no injuries were reported, one person was said to be missing but was located today.

Authorities evacuated 4,000 residents as gas and ash continued to come out of the volcano. They have also closed access to the dangerous area, which is near the cities of Puerto Varas and Puerto Montt, around 620 miles away from the capital, Santiago. 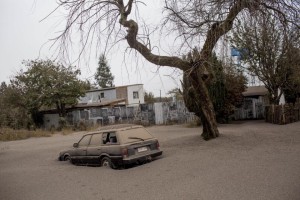 “I was shocked. I had just arrived home when I looked through the window and saw the column of smoke rising up. We called our families, posted photos,” said Daniel Palma, a psychologist who lives in the area.

“We woke up today with a blanket of fog and it hasn’t cleared. We have a layer of smoke above us,” Palma said, adding that many were concerned about the possible effects of the ash on their health.

Experts in geology warned that people should prepare for a third and “even more aggressive eruption.”

With the situation getting out of hand, President Michelle Bachelet declared a state of emergency, saying the eruption of Calbuco was “more serious and unpredictable” than the one that happened last month in another volcano, which also forced them to evacuate thousands of residents.

“We don’t have any problems with supplies, water or sewage up to now. That’s not the problem,” said Bachelet, who visited the area Thursday. “Our problem is a respiratory one, from inhaling all of this ash, and the fact that this ash could generate some sort of environmental contamination.”

The ash landing on the cities and towns can bring short term dangers like eye and skin infections as well as water contamination, said Bernardo Martorell, a physician and the head of the sanitary planning division at Chile’s health ministry. “That’s why the people in the area need to evacuate,” Martorell said.

The ash has not stopped falling in Puerto Montt and other cities surrounding the area, said Patricio Vera, who’s in charge of a local radio station. Varas said the residents were really scared by the blast and immediately ran to buy gasoline and all kinds of supplies. This forced stations to ration sales, while supermarkets closed their doors early to avoid the risk of looting.

The volcano, which is one of the most dangerous in the nation, last erupted in 1972. Chile has 90 active volcanos right now and small eruptions happen fairly often, but this one was strong.

LATAM and other airline companies cancelled flights to the areas because the ash can damage the planes turbines.

Chile has been hit by Mother Nature in the last few months. Weeks ago, flooding made hundreds leave a town that wasn’t known for its rain. They also suffered deadly earthquakes that put the nation in a tsunami scare. Now they have to deal with the eruption of Calbuco, who looks like its not done yet.