China Suspends Climbing On The North Side of Mt. Everest

Hundreds of climbers and guides who were attempting to climb Mount Everest from the north side when a massive earthquake struck the area are packing their gear and leaving the mountain after expedition leaders said Chinese authorities announced that climbing is done until spring.

Some climbers in Nepal don’t want to leave and have announced plans to try to return to the mountain, a decision that was criticized by others in the climbing community.

Other people like climbing guide Adrian Ballinger, who was with California based Alpenglow Expeditions said in an email Wednesday that him and his crew are looking to leave the country as soon as possible.

No one in the north side was injured after Saturday’s strong quake, but Ballinger said the people in charge of that side of the mountain called the 25 teams made up of around 300 climbers to discuss the situation and determine if they’re going to be allowed to continue.

Today, Chinese officials held one last meeting and announced their decision to end the climbing season. Ballinger said the country made the decision because more quakes might hit the area and in solidarity with Nepal and the people that live around the mountain. “China believes Sherpas should be able to go home and begin rebuilding,” he said.

North Side Felt It

The north was not really affected and no injuries were reported, but the strong quake was still felt.

“We were eating lunch during the first. It started slowly and then became violent, 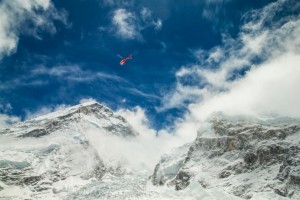 triggering big rock falls and icefalls of the surrounding peaks. Intellectually we felt safe in the middle of a big broad valley away from the mountains that were avalanching. But emotionally it was still scary,” he said. “And of course our thoughts immediately went to the South Side where the camps and route are far more exposed to avalanches.”

The other side wasn’t so lucky, nineteen people were killed in the base camp when an avalanche triggered by the quake swept through, destroying everything in its path.

Nepal has given some climbers permission to try again for the summit, but that is not a very good idea, considering that more aftershocks might occur at any moment.

Russell Brice, leading a team for the London-based Himalayan Experience Limited, posted a blog Wednesday saying they are considering a return to Everest. “Our Himex team will stay at Everest BC for the next few days and we will then decide if we will continue or not,” he said.

Brice said he met with the people in charge and the Minister of the Ministry of Tourism and received permission to fly his gear and supplies to Camp 1 after helicopters were free from rescue operations.

The decision made by many climbers to go back to the mountain has gotten some criticism from the American climbers. A veteran guide by the name of Peter Athans, who has climbed the Everest seven times, called the idea disrespectful.

He is not a fan of using helicopters to take gears and supplies to camps for the climbers.

“Ethically, it’s neither climbing the route and neither is it very respectful to the suffering of the Nepalese who need heli support immediately,” Athans said. “The climbers would be diverting this critical resource at a dire moment in the crisis.”

Athans doesn’t like the fact that the helicopters being used for rescue operations are doing these things because Camp 1 still has lots of supplies, according to him. He believes the helicopters should be doing more useful things, like trying to rescue people trapped in an area. “It does appear there was a priority to move Western people out of harm’s way without helping the Nepali people,” he said.

He also believes all the resources should be used to help out the victims. “My thought is expedition teams on the ground in Nepal — guides, doctors, Sherpas — could be using their skills and strength for far better purposes,” he said.

Should Nepal cancel climbing season on their side too?