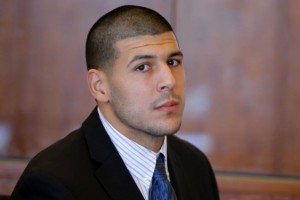 Aaron Hernandez’s lawyer made it known Tuesday for the first time that the former tight end was at the scene of a killing and saw it go down, but he described Aaron to jurors as a kid who simply did not know what to do while it happened.

Jurors took around an hour deliberating after hearing closing arguments in Hernandez’s trial on Tuesday.

The jury with its 12 members is scheduled to be back to work Wednesday as they decide whether the former New England Patriots tight end is guilty of the murder.

“Did he make all the right decisions? No,” Sultan said during his closing arguments. “He was a 23-year-old kid who witnessed something, a shocking killing, committed by someone he knew. He didn’t know what to do, so he just put one foot in front of the other.”

Aaron Hernandez is accused of killing Odin Lloyd in June 17, 2013. He was dating the sister of Hernandez’s fiancée. Lloyd was shot six times and died in an industrial park close to Hernandez’s home. At the time, the star tight end was playing for the New England Patriots and had appeared in the Super Bowl the year before, which they lost to the New York Giants. He had also signed a $40 million contract with the team. 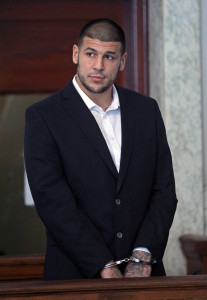 Sultan blamed the mysterious killing on Hernandez’s co-defendants, Ernest Wallace and Carlos Ortiz. Both men have pleaded not guilty and will be tried later.

William McCauley, who’s the Assistant District Attorney, said Hernandez’s behavior after the killing makes it seem like he took part in it. As evidence, he showed that Hernandez had rented a car for his friend and told his fiancée to give the two men $500 to run away. The Assistant District Attorney also played a video from inside Hernandez’s home that showed him hanging out with the men involved, just hours after Lloyd’s death.

“He’s laying around the pool, soaking up the sun, drinking up smoothies with his two confederates,” McCauley told jurors.

Sultan highlighted that prosecutors never presented a clear reason on why the former tight end would kill Lloyd, saying they were close friends and future brothers in law.

He also says that investigations have focused on just Hernandez and have tried to find anything that could lead him to being guilty.

The trial showed hundreds of pieces of evidence and inputs from 135 witnesses.

The party responsible for presenting the case, said Hernandez and his two friends drove to Boston to pick up Odin at his home, then they took him to the industrial park in North Attleborough and murdered him. A video shows Hernandez driving a rented silver Nissan Altima before Lloyd was picked up. There’s another video that shows Hernandez holding what appears to be a gun at his home just minutes after Odin’s death. A joint with the victims DNA and Hernandez’s DNA was found near the body.

The former Patriots player and his friends face a long time in jail if found guilty of the crime.