HBO was bothered by the amount of people that illegally downloaded episodes one to four of the new season of Game of Thrones. The company has sent out a bunch of warnings to Internet users involved in sharing the torrents. They’re lucky this time around because there will be no legal repercussions for the torrenters.

As TorrentFreak reports, the warnings have been issued through HBO’s anti-piracy partner IP-Echelon. They get ISPs to identify the IP addresses of the people doing these acts and pass on a warning about repeated violations of their terms of service. With this, users could be cut off, but that would be down to the Internet Service Provider they’re affiliated with.

Warnings and Other Targets

These DCMA (Digital Millennium Copyright Act) notices are nothing new and we see it done all the time by other companies, but they might make some of these people think twice before pirating material again. That is, if the alerts ever reach them because it was done by thousands, and HBO won’t get the chance to reach them all. It’s estimated that the leaked episodes, copied from a review screener, were downloaded millions of times before the season started last Sunday.

People torrenting the show are not the only ones the popular channel is targeting. The company has also been on the hunt for those who attempt to livestream the show over social media, especially on Twitter. If the users are caught, they risk having their accounts blocked, but we all know that won’t be enough. The company will probably take a bigger step if this happens again.

Game of Thrones has been an international success since hitting the screens back in April 17, 2011 and the problem of piracy has been with them for quite some time. Around 8 million people tuned in to watch the heavily anticipated first episode of season five, some more subscribers caught up around the same day. HBO has tried to combat illegal downloads in the past and has invented things like the HBO Now, which recently came out, to make the show more accessible without having to pay for cable or extra channels. The firm’s standalone online streaming service was a pretty good idea but people are still finding ways to watch it for free. Will they take bigger actions? 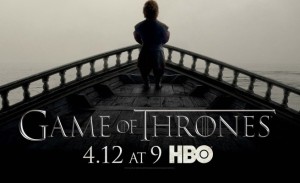 The episode premiered on April 12, 2015 and it takes material from A Feast for Crows and A Dance with Dragons, the fourth and fifth novels in George R. R. Martin’s A Song of Ice and Fire series, it has a little from his third novel too, A Storm of Swords.

The first four episodes which have already been seen by critics and some of the people who downloaded them illegally, have received really good reviews. On Metacritic, the season has a score of 91 out of 100 based on 28 reviews, indicating “universal acclaim”. On Rotten Tomatoes, the fifth season has a 97% approval rating from 35 critics with an average rating of 9 out of 10.

We will get the second episode later today and many are hoping it’s just as good as the first one.