The famous young star, Amandla Stenberg, who is mostly known for her outstanding role as Rue in the “Hunger Games”, spoke out about the cultural differences that the 16-year-old has noticed recently. The teenage celebrity made a video with her classmate three months ago, which is now a history lesson on black culture and cultural relevancy. This caught a lot of people’s attention, because she made a very shocking question to the viewers and America, she asked “What would America be like if we loved black people as much as black culture?”.

The star also added a video on tumblr called “don’t cash crop my corn rows”, where she started talking about the differences, she began with the first topic, which was hair, right off she named some celebrities who made the corn rows popular in the past. She mentioned artists like Alicia Keys, Beyonce and R .Kelly. The young actress stated this because she says that some white celebrities like this style and copy it to make them look younger, and get attention from all kinds of audience. She also said that they also imitate some dance moves and even their popular grills that are used to make your teeth look prettier.

Stenberg says some of the white celebrities that have copied some of these popular trendy styles are: Katy Perry, Miley Cyrus and Taylor Swift and referred to them to them as offenders. The young but opinionated star gives the public a cultural and clear appropriation and concise definition of this subject, adding that what she wrote might be a little blurry and difficult to understand, but she wanted to say it anyway. “Appropriation occurs when a style leads to racist generalizations or stereotypes where it originated, but is deemed as high fashion, cool, or funny when the privileged take it for themselves”, Amandla also states that some artists have gained more fans and a higher status by adding some aspects of black culture into their daily lives. 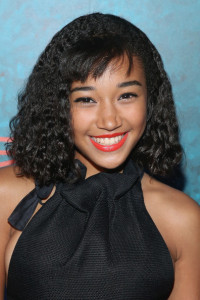 U.S.A, who were unarmed, like Michael Brown, Eric Garner and Tamir Rice. She ends her video with a reflection that has been talked about all over the place, especially in social media, and of course between people of the same culture “What would America be like if we loved black people as much as black culture?”, this reflection has a huge amount of people answering and stating their point of view, most of the people who watched this video are encouraging others to watch it, and to also voice what they think about it. Some even say that the star has shown them a lot by talking about this subject, her fans are extremely proud of her because she is one of the few artists that say what they think with no fear.

She says that everyone should make their opinion count, and that people should make an opinion about a person when they get to know them well, not just base it on the color of their skin. She admits she is still young but she knows everything going on right now, and finishes by telling her fans that she is very thankful for their support and that she learns from them daily.