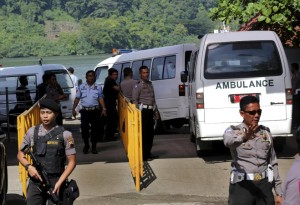 Indonesia ignored all the appeals and executed eight people convicted of drug smuggling on Wednesday, although a Philippine woman was granted a stay of execution.

Attorney General Muhammad Prasetyo confirmed the executions hours after the deaths had been widely reported. All eight were executed by a 13-member firing squad.

“The executions have been successfully implemented, perfectly,” Prasetyo said. “All worked, no misses,” he said of the executions of two Australians, four Nigerians, a Brazilian and an Indonesian man. The attorney also announced that the woman was not executed.

Not Ok With The Executions

After the executions, Australian Prime Minister Tony Abbott announced that the country will withdraw its ambassador from Jakarta. All this in response to the executions of Myuran Sukumaran, 33, and Andrew Chan, 31, both Australian. “These executions are both cruel and unnecessary,” Abbott told reporters. 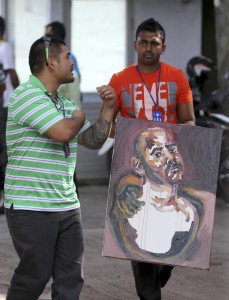 He says they’re cruel and “unnecessary because both of these young Australians were fully rehabilitated while in prison.”

Brazil’s President Dilma Rousseff was also not happy about what happened and that this “marks a serious event in the relations between the two countries.”

Brazil had asked for a stay of execution for Rodrigo Gularte, 42, on humanitarian grounds because he was schizophrenic.

Brazil has had others executed recently, Marco Archer Cardoso Moreira was one of six drug convicts that Jakarta executed in January, ignoring the appeals from Brazil and Netherlands. The two also withdrew their ambassadors.

In the Phillipines, officials and family were happy to see that Veloso was not executed along with the other eight. Mary Jane Veloso’s mother, Celia, told Manila radio station DZBB from Indonesia that what happened was “a miracle.”

“We thought we’ve lost my daughter. I really thank God. What my daughter Mary Jane said earlier was true, ‘If God wants me to live, even if just by a thread or just in the final minute, I will live,” Celia Veloso said.

“The Philippine government thanks President Widodo and the Indonesian government for giving due consideration to President Aquino’s appeal that Mary Jane Veloso be given a reprieve,” presidential spokesman Herminio Coloma said.

“Such reprieve provides an opportunity for the perpetuation of her testimony that could shed light on how a criminal syndicate duped her into being an unwitting accomplice or courier in their human and drug trafficking activities,” he said.

The crowd of 250 supporting Veloso held candlelights and had a vigil outside the Indonesian embassy in Manila.

“We are very happy. It’s euphoric here. Everyone’s rejoicing and waving their flags after learning that Mary Jane has been spared,” protest leader Renato Reyes said outside the embassy.

Veloso, 30, was arrested five years ago at the airport in the central Indonesian city of Yogyakarta, where officials discovered around 5.5 pounds of heroin hidden in her luggage.

Veloso was not executed because her boss was arrested in the Phillipines, and this will give authorities some time to investigate on the case. That doesn’t mean she’s safe though. “This delay did not cancel the execution. We just want to give a chance in relation with the legal process in the Philippines,” Prasetyo said.

The woman who supposedly got Veloso into the drug business, surrendered to police in the Phillipines on Monday and will probably be questioned. Veloso has said many times that she was used as a drug mule without her knowledge.

With all the controversy surrounding this case, should these executions exist?

Nov 29, 2021
The month of November has brought the November Savings and Black Friday deals but PlayStation Blog has announced one more sale. Beginning on Nov....