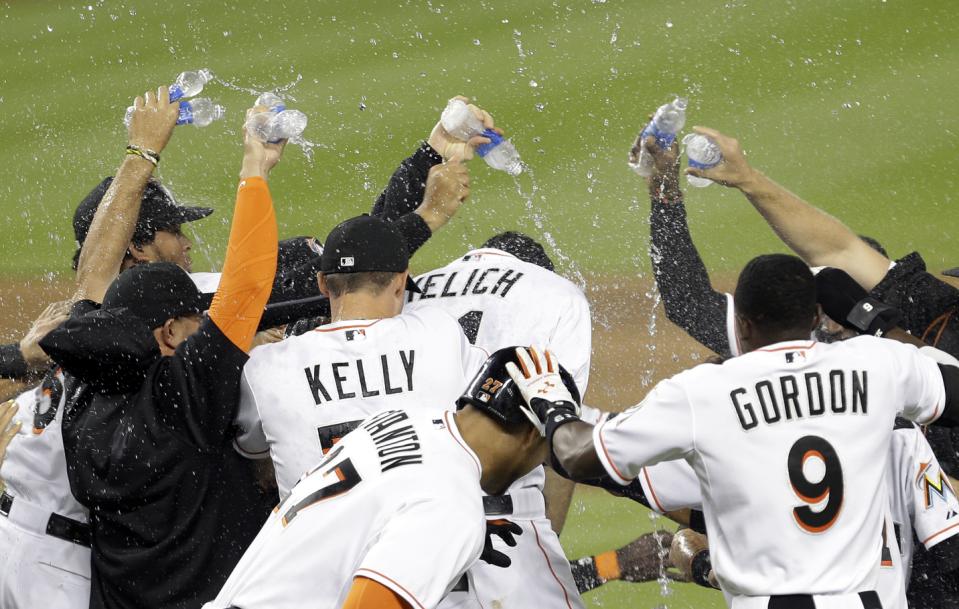 There it is, the Marlins everybody have been waiting for. The win was not easy though..

Christian Yelich drove in three runs, including a game winning RBI single in the bottom of the 10th inning to propel the Miami Marlins to their first win of the season, 10-9 over the Tampa Bay Rays on Friday night.

Giancarlo Stanton also provided three RBIs and first baseman Michael Morse drove in two for the Marlins, who led 8-1 before the Rays scored seven runs with a furious rally in the seventh inning to tie it.

Miami, which beat the Rays for the fifth consecutive time, scored just three runs in its first three games against Atlanta before exploding for 10 today. This offensive show avoided a franchise worst 0-4 start.

Speedy second baseman Dee Gordon doubled down the right-field line with one out against Brad Boxberger (0-1) before Yelich drove a ground ball through the left side, scoring Gordon without a throw home.

Bryan Morris pitched just one inning, but took the victory for the fish.

The Rays would come back with a three run triple and a Kevin Kiermaier shot.

Stanton gave the Marlins breathing room with a tiebreaking RBI single in the bottom of the eighth inning. But the game was tied again, after Morse tried to go for the double play and ended up giving them a run after Cabrera made it back to first before the ball.

Miami was leading comfortably after scoring six runs in the fourth inning to take an 8-1 lead, started by a two-run single by Yelich and two-run double by Stanton.

Ex-Dodger Dan Haren pitched six good innings in his Marlins debut, allowing just one run and exiting the game with an 8-1 lead.

Miami relievers, David Phelps and Sam Dyson, made things ugly for the Marlins, after they walked three straight batters, that made the score 8-4. 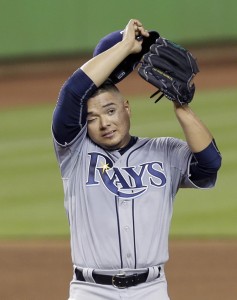 DeJesus then had a clutch pinch-hit, three-run triple to right-center field off A.J. Ramos and Cabrera singled to score DeJesus to tie it at 8.

Steve Geltz, who came in after the run spree, allowed one score in two innings in his first career start, pitching for Erasmo Ramirez, who was tagged for seven.

– Outfielder John Jaso was placed on the 15-day disabled list before the matchup, giving the team a major league-high nine players on the disabled list.

Stanton is known for his power, but last year’s NL Gold Glove finalist also has a strong arm. In the first, he showed that to the crowd when he threw out Cabrera at second base, when Cabrera tried stretching a single into a double. It’s the second time in the season that the highest paid player in the league does this.

Chris Archer gets the start for the Rays, as the team looks to improve to 2-3. Jarred Cosart will make his season debut. Cosart was fined by the league for gambing, but the investigation showed that he was not doing it on baseball.

Aug 13, 2020
Fall Guys: Ultimate Knockout is getting a patch that comes with multiple fixes and a new level. The Mediatonic game was released for Steam...