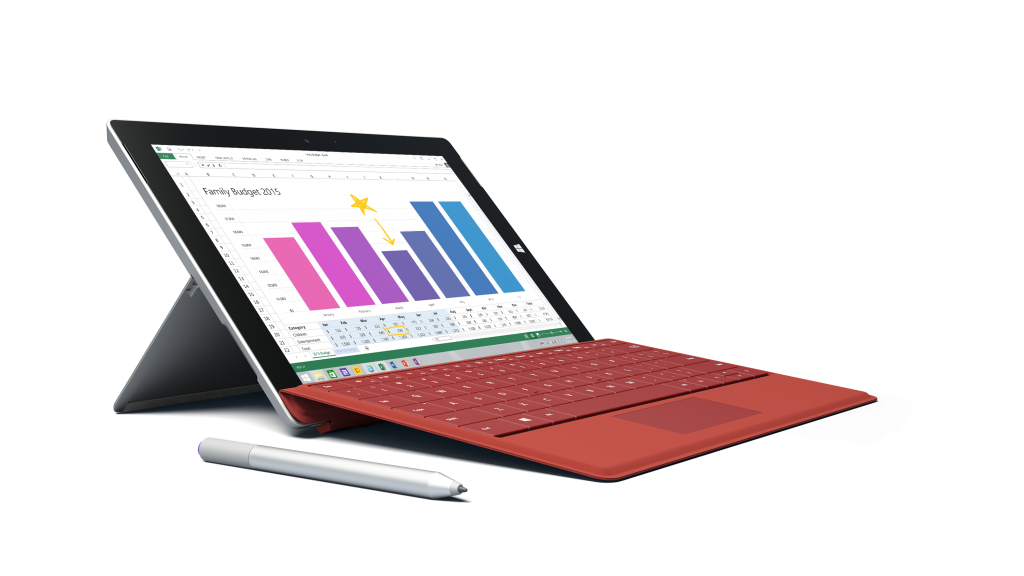 Microsoft has announced the next iteration of its ever growing tablet lineup today. The new, ultra-lightweight model will be called the Surface 3.

The new Surface 3 features the same design as the previous Surfaces, but Microsoft has made it thinner and lighter. At 8.7 mm thick, it’s just a few millimeters thicker than the iPad air, but this tablet is running a full and complete copy of Windows, just like your computer.

Not new to the Surface line is the familiar kickstand to hold your device up when you need it to and disappears when you don’t. The Surface 3’s kickstand can fit to 3 preset positions for various use conditions.

Microsoft has stuck with the same 3:2 screen aspect ratio introduced on the Surface Pro 3, running at a crisp 1920 by 1280 resolution. However, in the Surface 3, the screen goes down to 10.8 inches instead of the 12 inches in the Pro 3, making it slightly smaller than its bigger sibling.

Both cameras on the new Surface (a front 3.5 MP shooter, and a 8 MP rear shooter) can record 1080p video, and they have added auto-focus to the rear camera.

The 10 hour battery life while playing back video should easily get almost anyone through a good day of use. The Surface 3 now uses a micro USB connector to charge, like many of your other devices. We were disappointed to see that Microsoft has not gone the direction of USB Type-C, since we’d really like more devices to start implementing that standard. The included 13 watt charger is the “fast charger”, as Microsoft calls it, but in a pinch your phone charger and cable will work as well.

The tablet features a full size USB 3.0 port, Mini DisplayPort, a MicroSD card reader, a headphone jack, and a Micro USB charging port. The bottom still has Microsoft’s proprietary connector used to attach Microsoft accessories, such as their keyboard and docking station.

Perhaps most significant about Microsoft’s recent announcement was the lack of an RT version of the tablet. Microsoft debuted Windows RT with the first Surface, which was an edition of Windows for low cost tablets which couldn’t run all the programs that can be used on a normal desktop machine. The new Surface 3 features an Intel quad-core 1.6 Ghz Atom x7 (code named Cherry Trail).

Microsoft’s new tablet comes with Windows 8.1 Pro preloaded, and will get a free upgrade to Windows 10 upon release.

A good upgrade to the Surface 2

The tablet will go on sale in the US on May 5th, and by May 7th, will be available in 26 other markets.

Microsoft will sell 4 different versions of the tablet:

All will share the same quad core Intel Atom processor, and will have roughly the same 10-hour battery life, according to Microsoft. While some might argue that there is limited storage for a “full computer” tablet, Windows 10 will greatly reduce the amount of space the operating system takes up, which will be a fantastic improvement for devices like this one.

To supplement the tablet and make it more fit as a laptop replacement, Microsoft has available a docking station for $199, as well as a mouse and keyboard for using it more like a laptop, especially when paired with the kickstand. The tablet comes with a one year subscription to Microsoft Office 365, which gets you full Microsoft Word, Excel, Power Point, Outlook, and 1 TB of storage in Microsoft’s OneDrive, should the 64/128 GB not be enough for you.