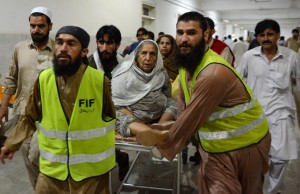 A strong storm in northwest Pakistan, seen as a “mini-cyclone”, has taken the lives of 44 people and injured more than 200, officials said Monday, raising their previous death toll.

Intense rain and strong winds hit the city of Peshawar and nearby districts late Sunday. The storm took down trees, causing dozens of roofs and walls to collapse and blocking many roads.

Most of the injuries are from children, with an estimate of 100, according to officials, while farmers in the area have seen their fields completely destroyed or affected.

“At least 44 people have been killed and 202 wounded. The storm followed by heavy rain and hailstorm has severely damaged wheat crops and orchards,” Provincial Information Minister Mushtaq Ghani told AFP.

Ghani said that authorities were making an estimate of the losses and believe the farmers have lost hundreds of cattles.

Power is still out in Peshawar, the capital of northwestern Khyber Pakhtunkhwa province, and in parts of two nearby districts, Nowshera and Charsadda. The Information Minister said at least 29 people lost their lives in Peshawar alone, ten in Charsadda and five in Nowshera.

Aamir Afaq, a senior official of the provincial disaster management authority, confirmed the deaths in the 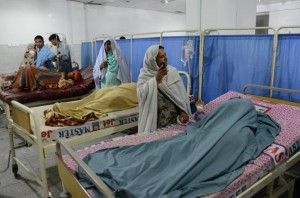 cities and towns and told AFP that rescue and aid efforts were underway “to provide food, shelters and emergency medical services to the affectees”.

An AFP reporter in the devastated area of Peshawar said rescue workers were working on removing fallen trees to open the blocked roads while engineers from mobile phone companies were repairing the towers that were damaged by the mini cyclone.

Late Sunday, flood waters from the rain reached a depth of a meter (three feet) in some parts of the city. The area is home to more than three million people. Authorities had initially estimated the death toll at 26 with 180 injured, but that number quickly changed to more.

Military forces have been called in to help in the rescue efforts, using ground-penetrating radars, concrete cutters and sniffer dogs, according to a tweet from a representative of the army.

The underdeveloped nation suffers from poor safety standards and this makes rescue efforts even harder. Many of the more than 200 victims in last year’s heavy monsoon rains died after structures collapsed, mainly roofs.

Poor construction is also said to be the reason for the collapse of the Margalla Towers apartment block in Islamabad in a 2005 earthquake. This tragedy killed 78 people and left many others injured.

The heavily affected area is also the place of Pakistan’s battle against a homegrown group of Islamists that took arms in 2004 after the United States led invasion of Afghanistan.

The country was focusing on sending help to the victims of the massive Nepal earthquake. They had announced that they would send aircrafts with hospital beds and many other supplies. But now they will have to help out their own population, while clashes go down nearby between extremists and military forces.