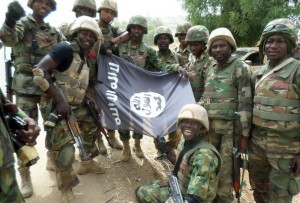 Nigeria’s army has rescued 200 girls and 93 women during a military operation to take back the Sambisa Forest from the Boko Haram Islamist militant group, who has recently taken several areas of the nation.

Boko Haram kidnapped more than 200 schoolgirls near the northern village of Chibok last year, causing a huge campaign from Michelle Obama and several other movements. The group established six years ago has killed thousands of civilians and kidnapped many more.

“Troops this afternoon rescued 200 girls and 93 women from Sambisa Forest. We cannot confirm if the Chibok girls are in this group,” army spokesman Major General Chris Olukolade said. He also added that Nigerian troops destroyed three camps that were part of the group there.

Diplomats and intelligence officials say they believed at least some of the girls were being held in the forest about some 60 miles away from Chibok. U.S. reconnaissance drones failed to find them but officials still believed they were there.

The girls and women will be asked a few questions on Wednesday to find out if they were kidnapped or if they were forced to marry members of the group, one intelligence source told Reuters. “Now they are excited about their freedom,” he said. “Tomorrow there will be screenings to determine whether they are Boko Haram wives, whether they are from Chibok, how long they have been in the camps, and if they have children.”

In the process, some of the girls were injured, and some of the extremists killed, but nothing else was said about the operation.

The group of women and girls were rescued on Tuesday afternoon from the camps, “discovered near or on the way to Sambisa,” one army official said.

Nigerian forces backed up by warplanes invaded the vast former colonial game reserve a few days ago as part of an attempt to take back some of the territories the group have taken recently. 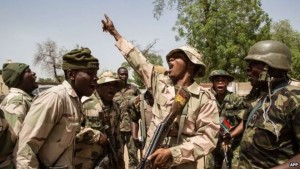 The group, known for its violence against innocent civilians, controlled an area roughly the size of Belgium at the start of the year but has since been forced to retreat to other areas after Nigerian troops, backed by Chad, Niger and Cameroon came up with military operations to push them back.

While the army backed up by different nations knows most of the terrorist group is staying at Sambisa Forest, militants have managed to launch attacks in nearby areas, making soldiers flee out of Marte town and an island on Lake Chad.