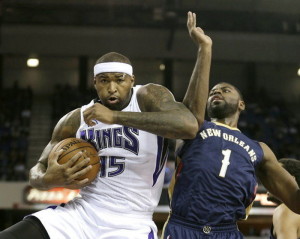 The New Orleans Pelicans are not backing down.

Quincy Pondexter and the rest of the team looked up at the scoreboard every chance they got during their close 101-95 victory over the Sacramento Kings on Friday night. They wanted to see if the Oklahoma City Thunder would slip and give them a chance to get close in the standings for the final playoff spot in the Western Conference.

“I was watching it the whole game, I’m not going to lie,” Pondexter said. “Thanks to the guys in Memphis for looking out on that one.”

The Grizzlies helped and the Pelicans did not waste the opportunity. 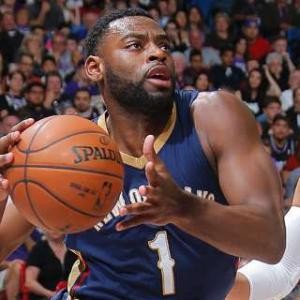 Eric Gordon provided 21 points, Tyreke Evans almost had a triple double and the New Orleans Pelicans gained a little bit of ground in the Western Conference playoff race by beating the injured Kings. The Pelicans, who are now 41-34, are a half game back from the Oklahoma City Thunder. This is now their fourth straight victory.

“We know where we are. We know what we want,” Pelicans coach Monty Williams said. “We’re playing for something bigger than all of us. And that’s a cool thing and that should be fun.”

Tyreke finished the night with 19 points, 12 rebounds and nine assists against his old team. New Orleans led by as much as 18 points in the third quarter and then held on for a victory against DeMarcus Cousins and company for a big road win.

The Kings on the other hand, have now dropped four games in a row despite Cousins’ having a huge triple double. The star center had 24 points, 20 rebounds and also 13 assists. He also blocked four shots.

“Teams are playing me so many weird ways whenever I catch the ball,” he said. “So I try not to force anything and get my teammates involved.”

Cousins did not get much help from his teammates and to make things worse, Rudy Gay was out for the second straight game with a concussion.

New Orleans was unstoppable from beyond the arc, shooting 14 for 29, including six by Pondexter. The Pelicans also beat the Kings on the rebound battle 50 to 38.

The Pelicans led 71-53 midway through the third and it looked like it would be an easy blowout victory over the Kings, but Cousins helped the team fight back with a 16-0 run. The team kept getting breathing rooms, but Cousins was sensational. The big man rebounded and made an assist to Omri Casspi that brought the Kings within two with just four minutes to play.

Evans stepped up and closed out the game with a nice layup. The basket gave New Orleans a six point 99-93 lead with less than a minute to play.

– Sim Bhullar, a player called up from the NBA development did not play. He is waiting to become the first player of Indian descent to appear in the NBA.

– New Orleans finished with a 3-1 record against Sacramento this season.

– Cousins is the first player with consecutive triple doubles since Chris Webber.

Kings play at home against Utah on Sunday.