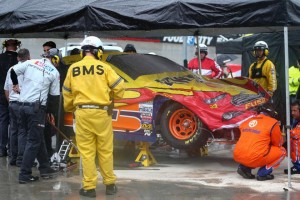 After rain poured on Bristol Motor Speedway for most of Sunday morning, NASCAR took advantage of a small break from the wet and cloudy day to get the Food City 500 underway as soon as it could.

After NASCAR’s rush to get things going, the day turned out to be a bad one for the two Team Penske cars of Brad Keselowski and Joey Logano.

Keselowski was in third place and attempting to pass a car when the back end of his car snapped around off a corner. He tried to save it, but as he tried, Logano, who was in fourth, got into the gas and ran into Keselowski, the two would end up hitting the inside wall.

A few minutes after the unfortunate crash, which happened on lap 19, it started to rain again and the race was red flagged after 22 of a long 500 laps. Bristol laps take around 15 seconds to complete, so you can imagine how long the race lasted. Racers and viewers were not happy.

The Penske cars involved in the crash, sustained heavy damage and Logano took his car directly behind the wall.

Now that we got the crash talk out of the way, it’s fair to ask what the point of starting the race was. NASCAR 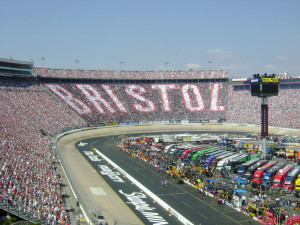 knew very well that the constant rain, part of a massive storm system expected to hit Bristol Motor Speedway for pretty much the entire week before the long race, was coming again. It didn’t take long as it rained a few hours before the race.

When NASCAR made the unexpected decision to get the race going, some drivers were caught off guard and quickly ran to their cars. Things looked like they were going to go well after the Air Titan track drying system had the track dry a little sooner than with the older drying technology. It really seemed like the attempt was going to work and the race would go as planned. Some of the fans were left wondering if this was just an attempt to show off the new technology instead of actually getting the 500 laps done.

The race would eventually be restarted after a long delay.

In March of last year, NASCAR introduced the second generation of its Air Titan track drying system, and said that the new technology would reduce drying time as much as 50 percent over the first generation.

The improved Air Titan is much smaller and compartmentalized than the one before, which required several trucks joined together by hoses and powered by generators. The new unit requires just one vehicle, a Toyota Tundra. The new unit is placed on the bed of the truck and it does its work. NASCAR usually brings more units, depending on the size of the track. The new Air Titan also triples the blade capacity of the first version and delivers 2.6 times the air volume but consumes nearly 80% less fuel.

NASCAR’s chairman has said before that the goal for the Air Titan technology is to reduce drying times by 80 percent. With the progress they’ve made the last few years, it won’t take long.