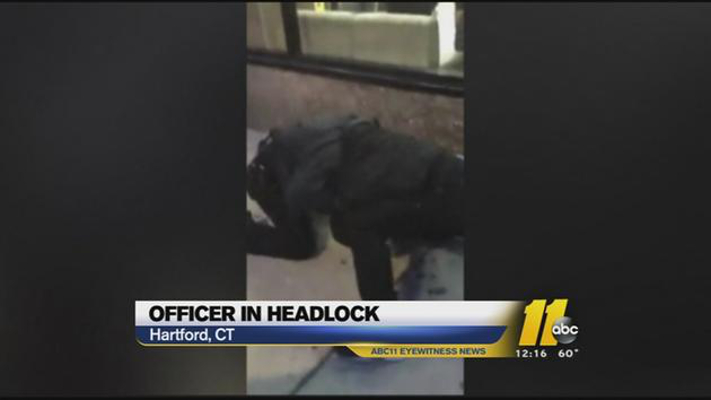 A 17-year-old Weaver High School athlete made a serious mistake by holding a Hartford police officer in a headlock for more than 18 seconds at a Burger King. In the video you can see the big crowd surrounding the two, cheering and spectating, but not helping. Deputy Chief Brian Foley says it was a dangerous situation for both, especially the officer.

“He was beginning to lose consciousness according to his report, so it’s not pretty to see on TV, but this is what occurs out there and this is the new face of what is going on in the country in 2015,” said Foley.

The officer managed to get out of the headlock and the teen tried to escape but he catches him and uses pepper spray and then hits him in the leg with a baton before he is able to take him into custody. The spectators immediately called it police brutality, but people that were at the Burger King restaurant have a different version. The teen was not under control and fought the officer.

“That’s assault on a police officer,” said one man.

“That is crazy,” said a woman. “That is assault on a police officer.”

The 17 year old is now in deep trouble after the Deputy said he was charged with various crimes, including assault on a police officer.

“The new face of what is going on in the country in 2015, these police videos are coming out more and more and more and we embrace it in the city of Hartford,” said Foley. “We wish there was more video of this incident.”

This isn’t the first time this Burger King restaurant is on video, there are other fights in the internet in the exact same spot. All have been uploaded the last two years.

Police have taken action and are cracking down on high school students who hang out in that area to fight and cause problems. That’s what the police officer was doing last night. The officer asked the teen to exit the Burger King because he was loitering and was not in there to buy a meal, and that’s when the incident ocurred. Deputy Foley says they have ways to take care of this, but when a person gets violent, they have to take action.

“You want the verbal commands first, then the physical restraint,” said Foley. “If that is not effective the next step would be your pepper spray. From there it would be whatever devices you have on you.”

The officer involved in the dangerous situation with the teen is out on medical leave after suffering minor injuries in the incident.