Universal Pictures just released another poster that is part of three, which are showcasing the new movie “Jurassic World” ahead of the official trailer debut on Monday. In the poster which was released on Friday, there was a picture of Bryce Dallas Howard fighting with a dinosaur. Now, the second poster in the group of three has come out, which shows an underwater dinosaur. 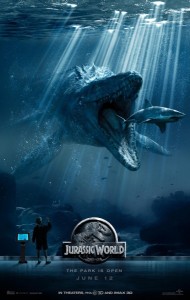 The new dinosaur featured in the underwater world has not yet been talked about or really brough up in the franchise of Jurassic, so it looks like that is about to change. The underwater dinosaur, which is known as a Mosasaurus, looks to be getting ready to eat a shark, although you can’t see the who dinosaur from the image on the poster. The official trailer comes out Monday, so there will be one more poster release, on Sunday, in anticipation for this new Universal Pictures film.

If you have not heard about the new “Jurassic World” movie, the latest installment of the franchise, it will be hitting theaters on June 12, 2015. The movie stars Chris Pratt,Bryce Dallas Howard,Nick Robinson, Ty Simpkins, Vincent D’Onofrio, Irrfan Khan,Jake Johnson, Omar Sy and Judy Greer. While it’s hard to tell from the posters, it appears this movie will have a lot more realistic looking dinosaurs in it, which will be cool but also scary at the same time. The only thing that has been released as far as dialogue, has actually not been nearly as funny or entertaining as you would expect coming from the franchise, although it is too early to tell how good or bad the movie will really be. The director of the new movie is Colin Trevorrow, so there are high hopes that he can do this movie justice while also bringing some new action into the old franchise. It appears with the second poster release of the underwater dinosaur that new story lines and arcs will be developed, which might lead to more entertainment and thrills than the last couple movies.