You will never believe how small this trackpad is

The NailO is a miniature trackpad that consists of many high-tech components, allowing you to send actions through gestures on your nail. 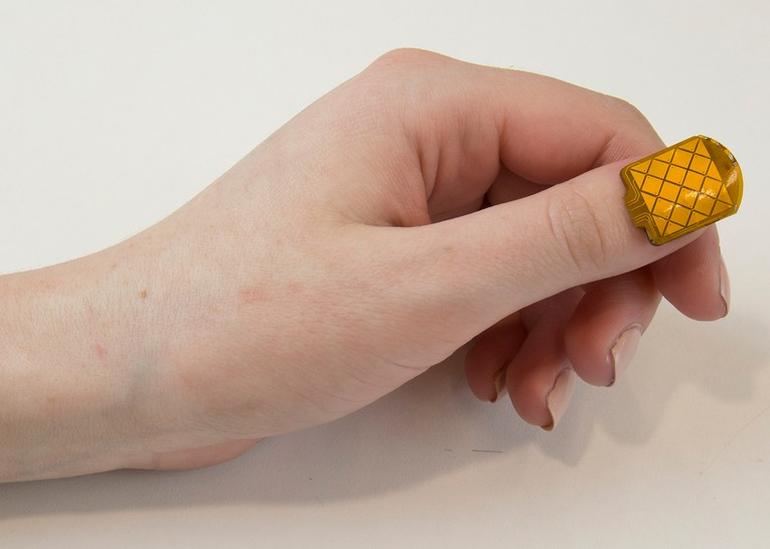 Have you ever gotten the urge to answer that text message or finish that last level of Candy Crush Saga during a meeting? Doing so would result in a nasty look given by your co-workers as you fiddle away on your phone.

However, what if you could do this as simply as touching your thumbnail with your index finger? An unnoticeable gesture could immediately send a text or email at the power of your fingernail.

With the NailO, you can do just that. It serves as a nail-attachable surface designed by MIT Media Lab that enables the user to send actions through gestures. This mini-trackpad is especially useful in situations where speaking or blatantly using your smart-device would be considered inappropriate or rude.

The miniature trackpad contains a battery, a micro controller, a capacitive sensing chip (and sensors), three separate chips, and a Bluetooth radio chip. These components work together to send information wirelessly to your smart device or PC through Bluetooth. Walking around with these parts will not be heavy and through some innovation, will not look out-of-place on your nail.

One innovation is having a version of the NailO with a customizable component that the user could change to fit their preferences. The NailO seems to be just another accessory as if it were a necklace or a bracelet.

Cindy Hsin-Liu Kao who is the lead author on the paper and an MIT graduate stated “It’s very unobtrusive”.

“When I put this on, it becomes part of my body.” she further explained. If you are planning to attend CHI 2015, a human-computer interaction convention in Seoul, then you may be able to see the NailO in action. The paper written has already states that the device has earned a “Best of CHI” award and honorable mention.

In their recent evaluation of five gestures, the NailO deciphered more than 92 percent of the five in real- time. The NailO is still under development, but one goal is to remove the detection of unintended or accidental gestures. Calling your mom by swiping left during a romantic date never sounded so horrifying. To counter this, the MIT Media Lab has planned to design a 2-second gesture activation to ensure that there will be no unintentional gestures read. Their beginnings consisted of using copper electrodes and printing them onto flexible polyester. This enabled them to experiment with various layouts of electrodes. However, they have upgraded and now use off-the-shelf electrode sheets similar to those in other trackpads.

A graduate student in sciences and media arts (also one of the papers lead authors) stated that the antenna was very difficult.

“You have to put the antenna far enough away from the chips so that it doesn’t interfere with them.” Artem Dementyev further described. The team is currently planning on a three-year time frame to create a commercial release.

Kao described the devices relationship to the consumer when she explained “I have the power to take it off, so it still gives you control over it”.