A new study is showing that an allergy drug can help treat hepatitis C in mice. Hepatitis C is an infectious disease that is caused by a virus that attacks the liver, and up to 85 percent of people who have hepatitis C end up developing a chronic infection. There are over 185 million people in the world who have chronic hepatitis C, which left untreated can end up causing liver cancer or severe liver disease. In some cases, people need a liver transplant due to the chronic infections that can happen in the liver, and this is a huge burden on the medical system. 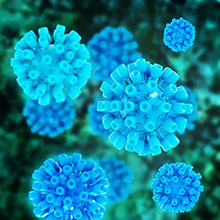 There is no vaccine right now to prevent hepatitis C, but there are a lot of treatment options available that can help cure the disease. These drugs however have a lot of side effects and can end up costing thousands of dollars, which some of the people cannot afford. A team of researchers that was led by Dr. T. Jack Liang wanted to find new treatment options that were more affordable, but also safe and effective. The researchers started by looking at drugs that were already approved by the Food and Drug Administration for other uses, because some of the drugs could have anti-HCV properties. If the researchers could find alternative uses for the approved compounds, then that would reduce the time and money needed to develop a new medication for hepatitis C.

The research group ended up screening a library of approved drugs which were developed by the National Institutes of Health National center for Advancing Translational Sciences. The researchers were looking for drugs that could block the hepatitis C virus from infecting and replicating the cells. The research was conducted at the National Institute of Diabetes Digestive and Kidney Diseases on the National Institutes of Health campus. The study was published in the Science Translational Medicine journal. The study showed that there are multiple allergy-relieving antihistamines that have antiviral activities and properties in them, and one of those drugs was called CCZ. CCZ was approved in the 1940s and the primary use was to help treat allergy symptoms.

The researchers were able to find out that the CCZ medication inhibited the HCV infection in human liver cells, and it also inhibited the infection in mice that were implanted with the human liver cells. The mice were then treated for between 4 to 6 weeks with the medication, and they had reduced levels of the virus, and there was no evidence of any drug resistance in the mice. This study shows that there are affordable medications available for hepatitis C, such as using the allergy-relieving medication. This type of medication is also safe and effective without too many side effects, so it is something that can be used on a large variety of people who are infected with the disease. The researchers say that this medication could be part of the treatment plan for people with hepatitis C, although more testing needs to be done in order to determine how safe and effective it is for primary use as a hepatitis C drug. The researchers warn people that they should not be taking CCZ yet to treat hepatitis C until those tests have been done, which should not take that long to do since this is a drug that is already on the market and approved by the Food and Drug Administration.

The researchers are hoping that this study and the findings will be the first of many for more effective and affordable treatments for other diseases as well. If more researchers start looking at already approved medications to treat other conditions, then people will be able to more likely afford their treatments and this will lower the health care burden on society. This study was done with mice, so more studies will need to be done using mice, and then clinical trials with humans will need to be done in order to confirm the results of the study. If the study results pan out, then this medication would be able to be used for hepatitis C within a couple years, although that all depends on funding and a variety of other factors.