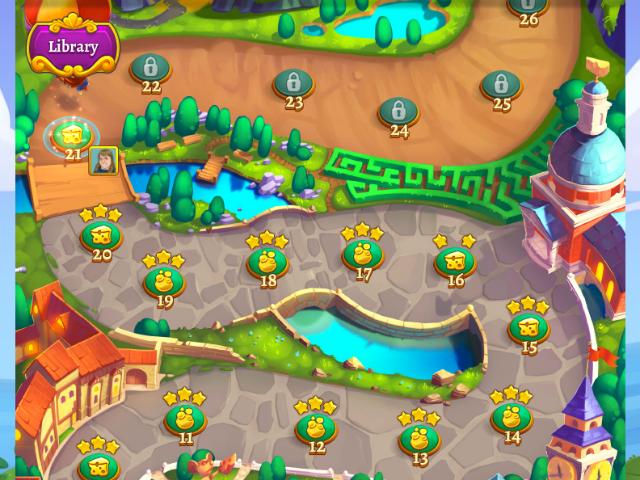 AlphaBetty Saga, a word game set in the 1930s, makes players find letters, connecting three or more to form a viable word. The game’s story follows Betty, her grandfather, Professor Alpha, and his assistant, Barney on a journey. Gameplay is similar to that of other word games, including Zynga’s Words on Tour and RockYou’s Words of Wonder. In the game, players are instructed to drag across letters, forming words in any direction, as long as the tiles are all adjacent. After the word has been created, the letters disappear from the screen.

The game has multiple levels with their own unique goals. The goals range from racking up a lot of points to clearing tiles trapped in bubbles. Power ups can be accessed by various tiles that are added to the screen. The crown, for instance, automatically clears additional tiles from the board. These power ups are activated upon using the associated letter in future words.

If the current arrangement of letters isn’t very useful, there is a shuffle button on the side that allows the player to rearrange the board. The shuffle ability builds up as the user plays, and becomes available once the bar is full.

Players can purchase upgrades and power ups before and during levels to give themselves a boost. These upgrades can include instant access to crowns, and the ability to add a line blaster to the board, removing letters in a row or column of the user’s choice. 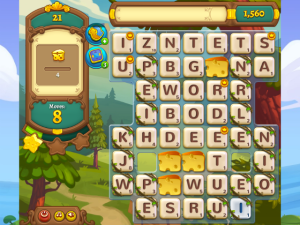 Each level is scored out of three stars, and they get more difficult as the user moves through the game. The game will hide letters by wrapping them in vines, or make more robust letters that take two turns to get rid of. The stars can be used to help the player detect artifacts, which can give the user various perks. The Mystery Mouse artifact adds a crown powerup to the beginning of every level, while a Royal Guard gives the user another move on top of the level’s limit.

Users have a finite number of lives, although they slowly regenerate over time. A life is lost when the player runs out of a set number of moves, which varies level to level. To supplement the social aspects of the game, users can send lives to friends and buy additional lives with real money.

The game is now available for Android and iOS, as well as on Facebook. The game is free, although there are in-game upgrades that can be purchased with money.